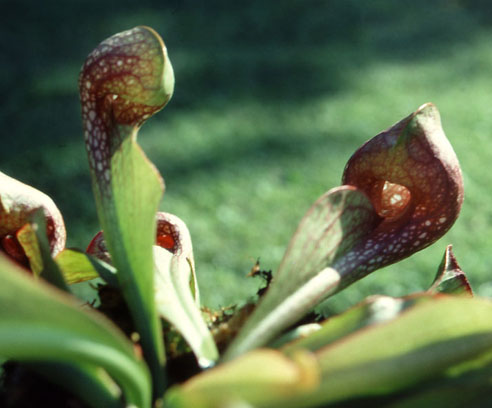 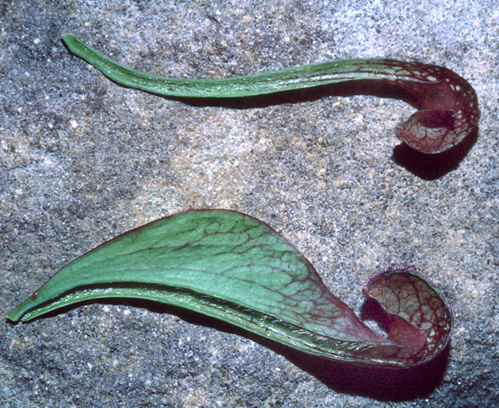 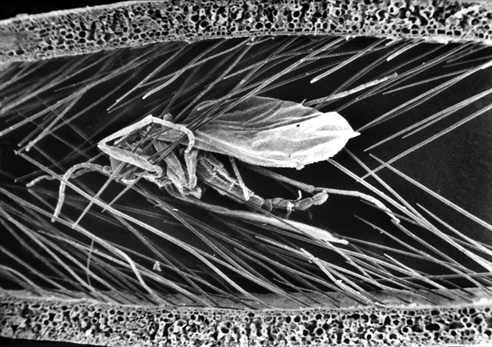 Sarracenia psittacina – The pitchers resemble somewhat of a parrot beak, and that is the reason for the species name, since psittakos is the Greek name for parrots. S. psittacina grows in a zone relatively close to the coast of five southeastern states in USA from Louisiana to Georgia. It sticks closely to the edge of ponds and streams, which often flood the plants. Hence, the pitchers may be submerged partly or completely for longer periods. It also tolerates more shade than the other species. Shaded individuals have green pitchers, while in full sunlight the pitchers are dark red. The pitchers are prostrate and constructed to function both above and below the water surface. The pitchers are 10-25 cm long with a wing up to 2 cm where it is broadest. It does not produce flat leaves for photosynthesis. The upper part of the pitcher is bent over in such a manner that the mouth is pointing towards the base of the leaf rosette. The pitcher edge, probably including the lid, forms a collar directed into the pitcher as a short tube. The pitcher is fenestrated as in S. minor and Darlingtonia. An aerial pitcher catches crawling and flying insects, but if it is submersed, it catches e.g. small crustaceans and fish fry. The pitcher functions as an eel-trap with the wing as a guiding net leading the prey to the mouth of the pitcher. This is attractive due to the light coming from the fenestrations. Inside the pitcher, about 2 mm long blocking hairs prevent the prey from reversing or swimming out again. The red flowers are 2-4 cm in diameter and placed on up to 45 cm long flower stalks, hence the spatial separation between flowers and traps are well established independent of the pitcher being above or below the water surface.