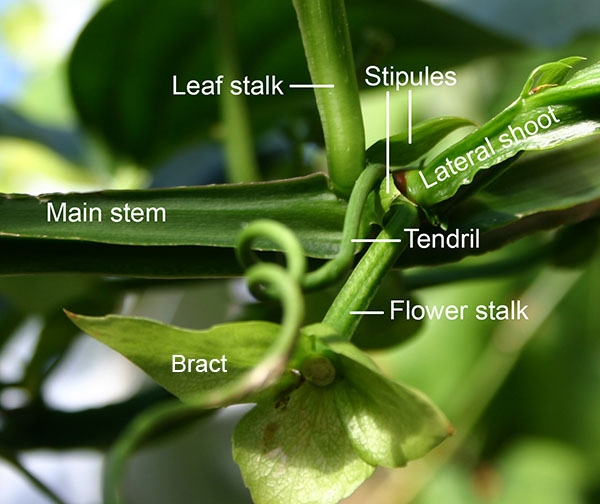 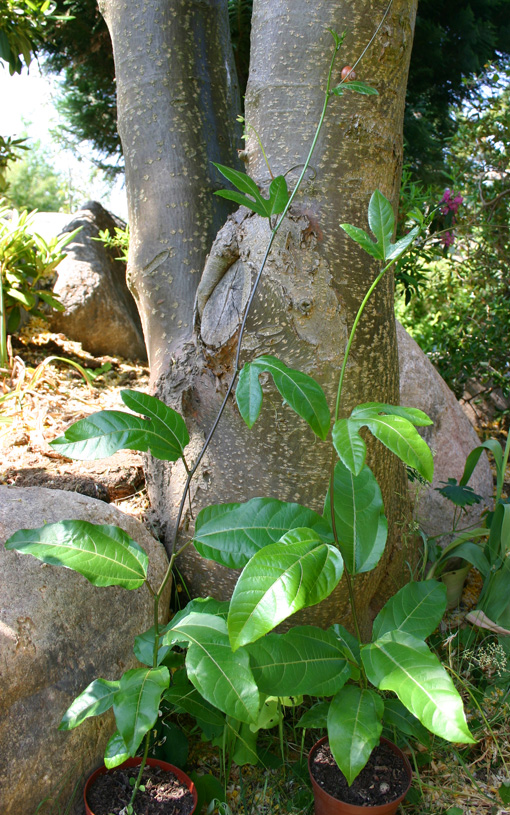 Growth form in Passiflora is vary variable. There are a few annual purely herbal species, which only reach knee height. The vast majority are climbing plants or liana either with a woody base and annual shoots that die back after each growing season or continue growth and become woody (lignified) the following year. The last mentioned becomes many meters long. Furthermore, there are actual trees up to 15 m high with a single trunk and a diameter of 20 cm 1½ m above ground. The root system is not well known, but some species have rhizomes used for vegetative reproduction and a few species among others P. caerulea form adventitious buds for the same purpose.

In relation to the height of the plants climbing plants have relatively thin and only little lignified stems, which cling to the supporting host. The stems are rounded or edged and the edges may be equipped with wings. In a minor number of species the shoot tip is recurved so the growth point (apical meristem) is pointed backwards in relation to the growth direction. Passiflora climbs by help of unbranched tendrils. At each knee (node) two stipules and two serial axillary buds are placed along the stem. The lowermost of these buds (closest to the leaf stalk) develops a tendril, while the upper one can produce a lateral shoot, an inflorescence, or stay dormant or suppressed, while solitary flowers apparently develop laterally to the tendril, hence the shoot building must be said to be pretty complicated.

The leaves are placed in a screw (2/5) except in species with triangular stems (1/3) and certain Australian species, where the leaves are opposite and in P. quadrangularis and related species, where the leaves are two-rowed (distichous – 1/2). The fraction indicates with the counter the number of times one has to go around the stem to reach a leaf positioned exactly above the leaf one started to count from. The denominator indicates the number of leaves passed on the tour. All species have two stipules at the base of the leaf stalk (tendril). Their shape and size vary much among species. Young plants germinated from seeds may have a leaf sequence with simple entire leaves below,  followed by leaves with a few lobes before adult leaves are produced with the final number of lobes, only then the axillary buds develop tendrils (photo at left). Leaves may also be variegated (with different coloration) but this occurs rarely when the plant is mature and able to flower.

The tendrils of Passiflora (upper and second lowest photo at left) are always placed on the middle of the stem, i.e. in the leaf axil, while tendrils in wine (Vitis) and the cucumber family (Cucurbitaceae) are positioned laterally and they are branched, what they very rarely are in Passiflora. Only the tree-form of Passiflora has no tendrils. A few species develop a hold-fast at the apex of the tendril. The tendrils perform circular movements, and Darwin observed that a P. gracilis tendril can twist a whole turn in 43 minutes at 32℃. The study of primitive Passiflora species has shown that tendrils can be interpreted as modified flower stalks on a reduced terminal flower from a larger inflorescence located normally in the axil of a leaf. This also explains why the flowers in some species are placed in pairs laterally in relation to stem and tendril.

Extrafloral nectaries (lowermost photo) occur in many species in different places on the plant. They can sit on the leaf lamina, leaf edge, leaf stalk (petiole) or on the edge of the bracts. Evolutionary they are probably derived from glands on the leaf teeth in the most primitive species. Nectaries on the bracts serve to keep nectar robbers away from the flowers. Several hummingbird pollinated species (e.g. Passiflora vitifolia) are subjected to nectar robbers such as bees, which cannot reach the nectar with their short mouth parts due to the long corolla tube, but these bees gnaw a hole on the corolla tube so they can get the nectar but without pollinating the flower. The nectaries on the bracts distract the bee’s attention and they furthermore attract ants and wasps which cooperate with the flower by chasing away bees and egg laying Heliconius butterflies. Nectaries on leaves and petioles are primarily seen as a safeguard against butterflies. Nectar robbery happens in a similar manner in many flowers from the parasitic family Loranthaceae. Nectaries on the leaf stalks are furthermore of great taxonomic value.

Return to Passiflora main page or to Butterfly forage plants