The bladder door is a complex and refined construction. In the larger bladders such as U. vulgaris and U. australis, the door opens in about 1/32 second. The complete process occurs mechanically and no electrical impulses (receptor- and action potentials) are involved as in Dionaea and Drosera (sundew). The flexibility of the door is achieved through an interaction of four hinges (hængsel on the left Fig.) with small thin-walled cells and a large area between the hinges. The outer cell layer of the door consists of small cells with stiff walls and the inner layer consists of cells with thin, curved walls that can be compressed like an accordion. The trigger hairs are inserted on the central hinge (centralt hængsel) and when touched they function as a lever. Therefore only a slight touch is needed to tip the doors lower edge out of position and the bladder vacuum will immediately suck the door inwards and upwards towards the bladder ceiling simultaneously with the compression of the accordion cells. This compression produces a spring tension in the cell walls and as soon as the pressure difference between the outside and inside of the bladder is evened out, the door will return to its resting position.

Utricularia australis, door seen from the inside. Moreover, a great number of 2-forked and 4-forked trichomes are seen.

The two photos below show transversal sections of the door. It has a shape like a section of a ball, and the accordion cells allow for compression both longitudinally and transversely. The lateral hinges consist of a few small thin-walled cells. Notice, the four trigger hairs are visible on both Figs.

Utricularia australis, trasversal section of the door in level with the base of the two uppermost trigger-hair. The bladder lumen is above and the vestibule below, where some slime secreting pear-shaped trichomes are cut. Stained with toluidine-blue couloring cell walls blue and cytoplasm light green.

Similar kind of section but placed higher in the vestibule. The shape of the door in resting position and all types of trichomes are seen.

Utricularia australis, the door  bends in the central hinge when a trigger-hair is touched. Stained with toluidine-blue.

U. australis, longitudinal section of the door with central pear-shaped. Stained with PAS-aniline-bllue-black, couloring carbohydrates red and proteins blue.

The outermost left Fig. shows two trigger hairs and the central hinge after activation. In the other left Fig., a pear-shaped slime producing hair is noticeable. The cells below this hair (kick plate of the door) have very thick outer cell walls while the inner walls are like Spanish walls (discontinuous partitions) as on the right Fig. showing four transversal sections of the door where the uppermost is located in level with the trigger hairs (two are visible). The stiff construction of the kick plate is important partly to ensure the full lower part of the door is tilted as a unity after touch of a trigger hair and partly to ensure a watertight closing when the door is in the resting position. This is evident from Figs. and text below.

U. australis, four transversal sections of the door from the level of trigger-hairs (uppermost) until near the lower edge of  the door (bottom) Stained with toluidine-blue.

As already mentioned under bladder types, the door has two different resting positions, either it is perpendicular to the threshold like in U. australis (above) or inclined as in U. reniformis (left) and U. lateriflora (right). In both situations, the door must be able to close watertight to the threshold. This is ensured by the threshold epithelium. The epithelium consists of three zones, where each epidermal cell produces a glandular trichome (diagram at left below). In the outer zone, the cuticle of the trichomes loosens and becomes extended to form a common water filled bag (velum). The velum ensures a close packing around the lower edge of the door. The innermost zone produces vast amounts of slime, which provides further security in cases, where the door becomes displaced a little (example at the bottom of the page). The hairs of the intermediate zone function as reserve hairs for the other zones and may either form velum or produce slime if necessary. Otherwise, they stay in a resting stage.

U. lateriflora, inclined door and velum with several cuticle balloons inside one another. The glandular trichomes consist of basal cell, stalk cell and a glandular head cell.

The diagram at left illustrates the three zones of the threshold epithelium. The outermost left trichome is a short-stalked alluring hair from the vestibule. Then a transition hair follows before the velum zone. During the growth of the glandular head, the cuticle breaks at the transition to the stalk cell. Therefore, three plugs (taps) are seen on the inside of the velum bag. In order to keep the velum water filled and extended, ions are pumped into the velum bag from the glandular heads. This requires both plenty of mitochondria to provide energy and a large surface of cell membrane. Therefore, labyrinth cell walls develop in both the basal cell, the stalk cell and the glandular cell. Furthermore, the stalk cells have cutinized cell walls to prevent back-flow. The cells in the transition zones develop the same elements but only to a lesser extent until there may be use for these cells. In the inner velum zone, the glandular cells secrete polysaccharides below the cuticle, which finally bursts, and cutinization of the stalk cell extends to the common wall to the basal cell, and finally all communication with the basal cell ceases. 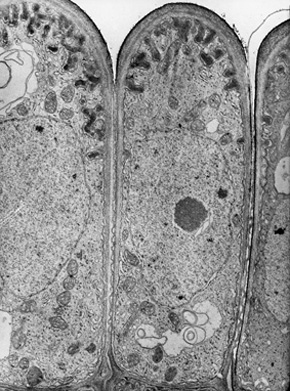 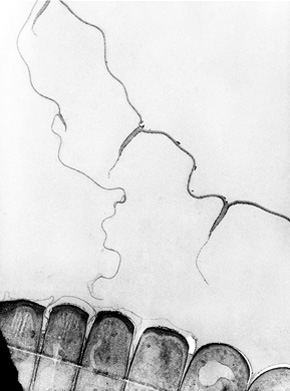 At the outermost left, glandular head cells with well-developed labyrinth cell walls are visible in three trichomes from the velum zone of Utricularia australis.  At the other left Fig. a velum bag from the same species is bursted, maybe during preparation. Velum consists of the outermost lipid-containing layer of the cell wall, the cuticle. The glandular trichomes have started producing a reserve velum. At right, glandular hairs from the innermost zone of the threshold are shown. They produce vast amounts of polysaccharide slime.

The two photos below focus on the velum. The transition zone is visible in the left photo and the inner zone’s slime producing glandular hairs are most clearly visible on the right photo.

U. australis, slime glands from the inner zone of the threshold.

Utricularia australis, partly collapsed velum. Lower right, the middle part of the threshold glands and some slime are seen.

U. australis, threshold and velum (left), then the middle zone and at right the slime producing inner zone of the epithelium.

Utricularia australis. A, daphnia antenna. S, slime. V, velum. Arrow, furrow made by the lower edge of the door in the antenna.

The left Fig. illustrates the antenna of a Daphnia has triggered a bladder of Utricularia australis. The Daphnia was too large to be swallowed by the bladder, but the antenna was partly engulfed and pinched below the kick plate of the door (arrow) when the door returned to its resting position. The Daphnia has fought to get free and the antenna has moved a little whereby slime from the threshold epithelium’s inner zone gradually has provided better closure between the antenna and the door edge. This gives the bladder the possibility to reestablish the vacuum and then a new stimulation of a trigger hair may bring the prey further or fully into the bladder. In the present case, it will not happen but it may be of value in other cases where e.g. a prey with a form like a worm is lured into the trap.