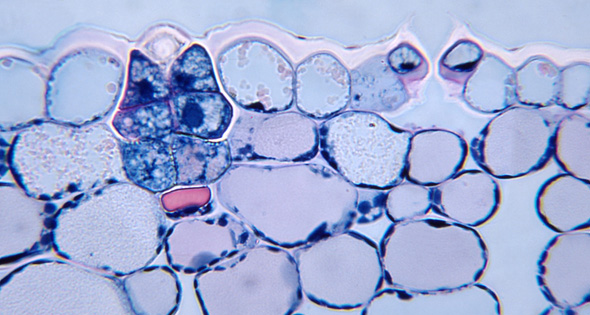 Sarracenia purpurea. Transversal section showing the outside of the pitcher wall. At left a nectary is seen and to the right a stoma with two guard cells. (staining: PAS-aniline-blue-black).

A nectary consists of about 14 cells. Outermost one finds two thick-walled cells surrounded by four thin-walled glandular cells. The two thick-walled cells are dead and have suberized walls. They seem to have lost function. They are interpreted as degenerated guard cells and hence the nectary is interpreted as originating from a stoma mother cell. 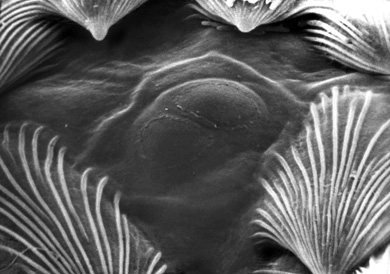 Sarracenia purpurea. Nectaries on the inside of the pitcher are surrounded by scale hairs. In the center, the two transformed ‘guard cells’ are visible. The narrow ring-shaped  swelling on top of the two ‘guard cells’ indicates the cuticle has been lifted up from the cell wall during nectar secretion and then collapsed during fixation for scanning electron microscopy.

S. purpurea. Nectary corresponding to the left photo but from zone 3 (see diagram). The stain neutral red is absorbed in the glandular cells and stored in vacuoles but not in the dead suberized ‘guard cells’.

— The secreted nectar increases the pressure in the cell walls above the gland, and this makes the cuticle separate from the cell walls above the two suberized central cells and the cuticle becomes inflated as a balloon. The already thin cuticle stretches until it bursts and nectar, fragrances and water are released. The nectaries are constructed similarly all over the pitcher but the composition of the secretion varies, and the nectaries in the lower part of the pitcher primarily secretes water. The photo below to the right shows a water-secreting gland from a pitcher that was partly filled with the stain neutral-red for seven hours. The stain is absorbed in the living gland cells but not in the central ‘guard cells’, where the suberization makes the cell walls impenetrable, nor in the surrounding epidermal cells where the cuticle is thick.