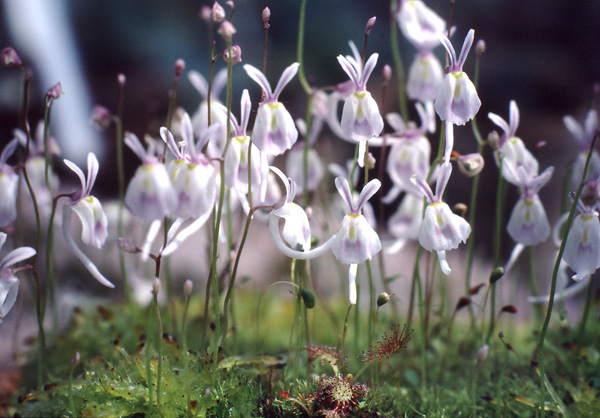 Utricularia sandersonii, runnners with leaves at the ground surface and bladders in the mud. The bladders are about 1 mm long. In the upper picture, a sundew (Drosera rotundifolia) has sneaked in between the flowering U. sandersonii.

Utricularia sandersonii, epiphyte with small spathulate leaves and tiny bladders on a runner.

Utricularia occurs in several lifeforms, which is not surprising considering the wide distribution and the great number of species. In northern latitudes, most species are free-floating or attached water plants. Attachment occurs partly by slime secreted from numerous glands on the runners. In the tropics and subtropics there are many swamp plants and epiphytes in moss cushions on trees and cliff walls. However, it is common for all species that the bladders must be surrounded by water to be functional. The growth point at the shoot tip (apical meristem) deviates in several respects from the general construction of the apical meristem in flowering plants. Based on the symmetry and degree of protection, which the young leaves provides for the meristem, one can set up several types of shoot tips which to some degree seem to be adapted to the growth media. A couple of examples are shown below.

Utricularia sandersonii from South Africa is mostly found as a lithophyte in moss cushions on wet cliff walls or in muddy crevices in the cliffs. If the relative humidity is constantly 100% U. sandersonii may send runners with bladders and leaves directly into the air as shown on the photo to the right. In water-saturated mud and moss cushions protection of the shoot tip is not so required, and it is noteworthy that no young leaves of U. sandersonii are curved over the shoot tip to protect the meristems thin-walled mitotic cells (able to divide) against drying out or against physical nuisance. The risk of mechanical wear on young bladder primordia during the extension growth of the shoot is reduced when the bladders are not initiated too close to the shoot tip.

Utricularia alpina in a moss-cushion on Jamaica. Photo H. Tybjerg.

Utricularia alpina from the northern part of South-America and the Caribbean Islands is epiphytic on tree branches as shown above. The shoot tip of the runners is slightly bent over (about 90°) and surrounded by fully developed slime glands. Initiation of the bladders occurs closer to the shoot tip than in U. sandersonii and it may be argued, that the danger of mechanical nuisance on bladder primordia is lesser in wet moss cushions than in mud while the risk of drying out is greater. In this context, the slime glands may play a role. At first, the slime is stored below the cuticle, but released when the pressure becomes large enough to blast the cuticle. In the shown picture, the slime was lost during preparation.

Utricularia alpina, the cuticle is split on the glands and the slime released.

In the most widely distributed swamp plant, Utricularia subulata, the shoot tip is similar to U. sandersonii, but in most other swamp plants such as U. reniformis (to the right and above) the shoot tip is strongly bent over. This means older and more robust cells are facing forward in the direction of the growth. Furthermore, the leaf primordia and the slime producing glands are located closer to the shoot tip. 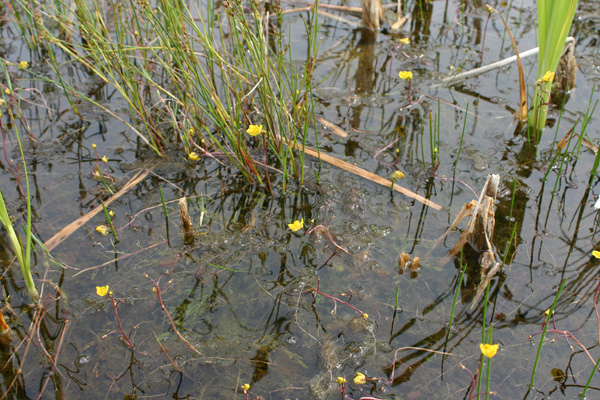 Utricularia australis (left) and other Danish species of bladderworts are free-floating water plants. In these species, the shoot tip is rolled up like a clock spring with one to several windings in the spiral. This brings almost mature leaves close to the meristem of the shoot tip, and hence the meristem is well protected against physical nuisance. The curled shoot tip also forms the basis for the development of winter buds.

Utricularia reniformis with the strongly bent over shoot tip can like the South-American U. nelumbifolia be found in the water tanks of Bromeliads and if so it can be denoted as a free-floating water plant. It must be underlined that  that the considerations about the relation between the shaping of the shoot tip  and the growth media  should be perceived as a hypothesis, since knowledge about the shoot tip is lacking for most of the species.

Utricularia rarely does any harm in nature, but the free-floating U. inflata occurring in Southeast USA is introduced to lakes in the state of Washington, where it forms so dense mats that it is a nuisance for smaller boats and it is a threat to the lakes naturally occurring bladderworts.