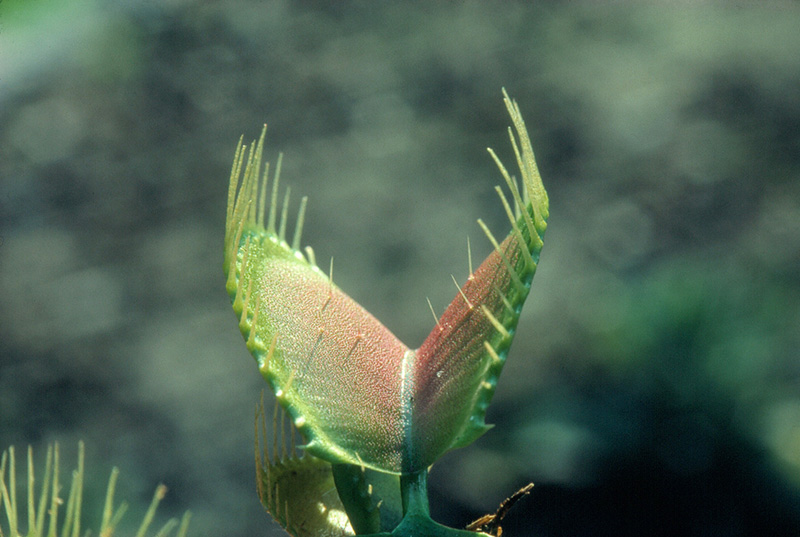 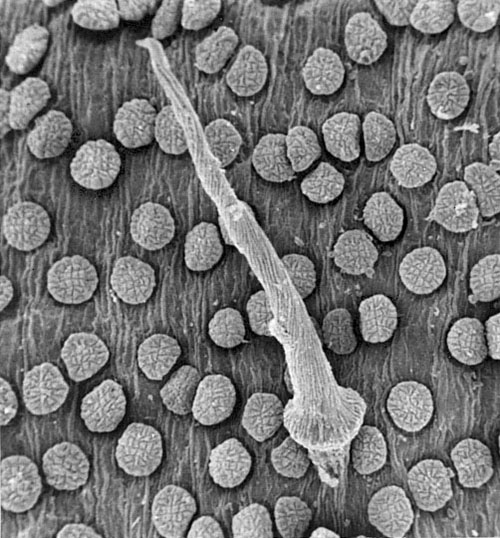 Dionaea has an active trap in contrast to the passive traps described for Sarraceniaceae and Nepenthes. Active means a movement participates in catching the prey. In Dionaea the two leaf lobes quickly close around the prey, while the teeth interlock so the prey literally coming behind bars. Hence the trap mechanism functions like a fox trap. The mechanism is only released after mechanical stimulation of one or two trigger hairs of which three are placed on each lobe. The trigger hairs are considered homologues to the tentacles in Drosera and Drosophyllum since they are constructed over the same basic plan with a head separated from a stalk by a layer of endodermoid cells (cells with a transport blocking lipid (cutin) embedded in some cell-walls – see diagram below). However, the head cells have lost their secretory function and the long pointed head functions in the trigger hairs solely on a lever principle, which enforces the mechanical stimuli resulting from prey touches. The pointed shape of the trigger hairs is an important reason that raindrops normally cannot release the trap mechanism.

When a prey of suitable size moves around in the trap it will sooner or later touch the trigger hairs and thereby activate the closure mechanism. To activate the trap two touches are required of the same trigger hair or one touch of each of two different trigger hairs within a time limit of 30 seconds. This system increases the chance that the prey is completely within the field of action of the trap, and that its size and nutritive value is not too small. Simultaneously, the number of useless catch attempts is reduced and that is important since it takes about a day to re-open an empty trap so it can be reused. 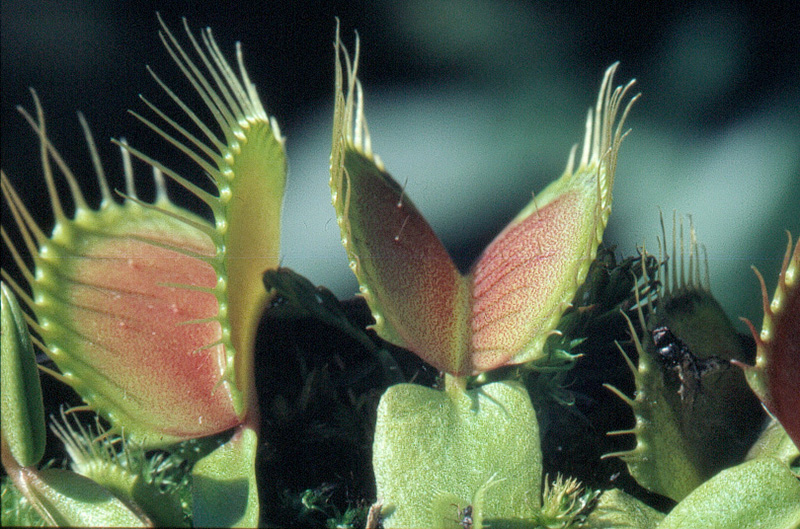 The trap is open and ready for operation. 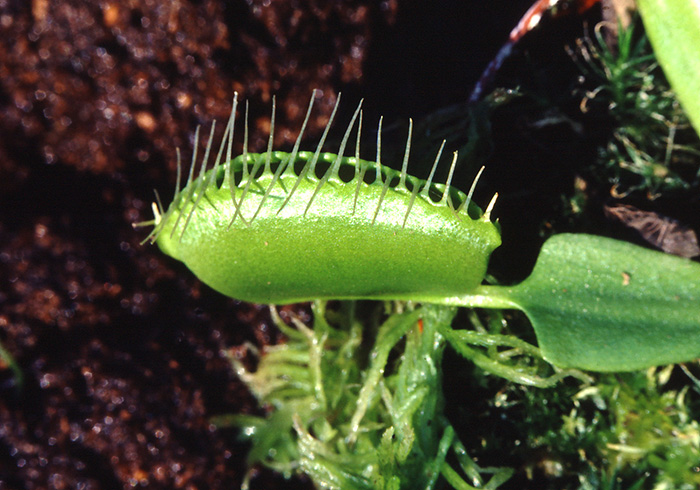 The teeth interlock after the fast part of the trap closure has finished. 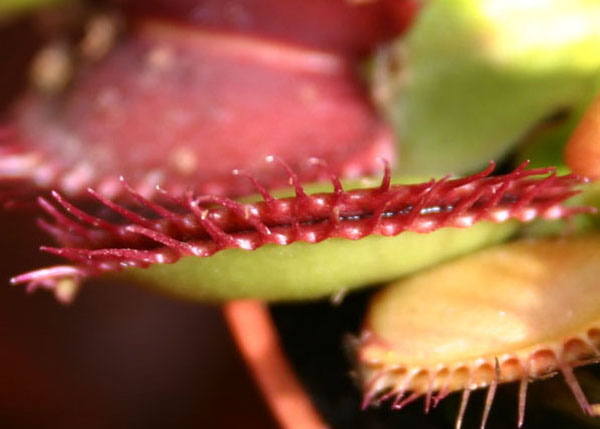 The slow part of the trap closure has finished, the teeth are straightened out, and the digestive fluid peeps out between the teeth. 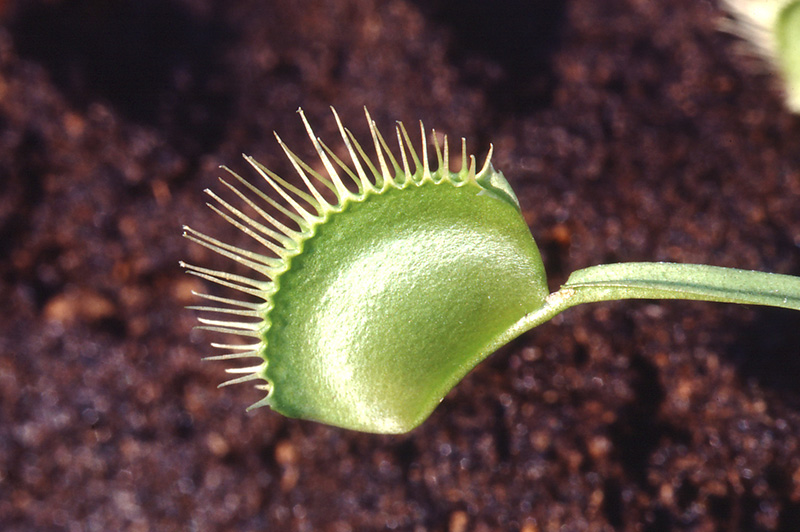 Same phase seen from the side. The leaf lobes are tightly pressed together and the teeth are again free of each other. 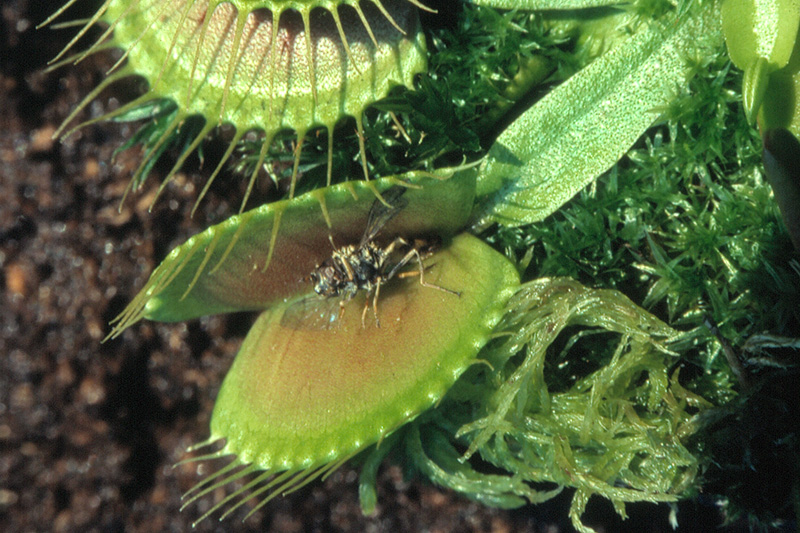 The trap is reopened after digestion of the soft tissues in a fly body. 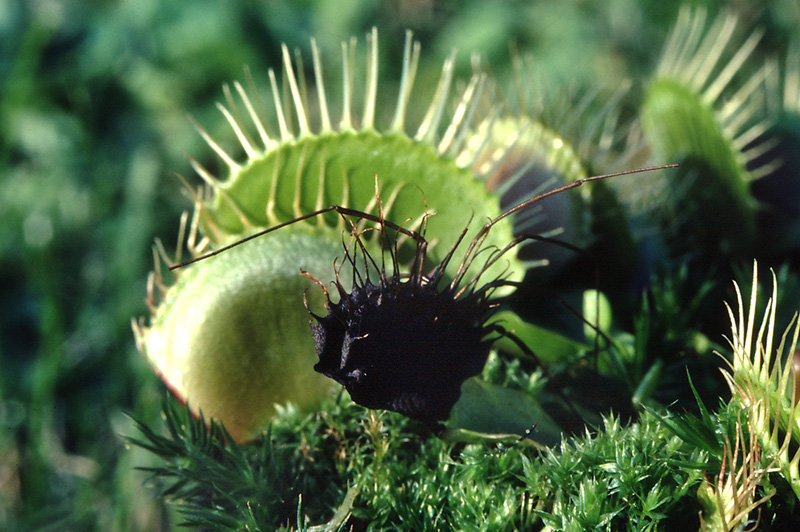 The closure of the trap happens in two phases, a fast lasting 0.5-5 sec. and a slow, which last several hours. The speed of the fast movement depends on temperature and the age of the leaf, while the slow movement further depends on the intensity of the prey’s continuing mechanical stimulation of the trigger hairs in its attempt to escape the trap. The first phase brings the edges of the two leaf lobes so close together that the teeth interlock, while in the second phase a complete compression of the leaf lobes occurs simultaneously with the secretion of an acid (pH 2-3.5) enzyme-containing digestive fluid begins. 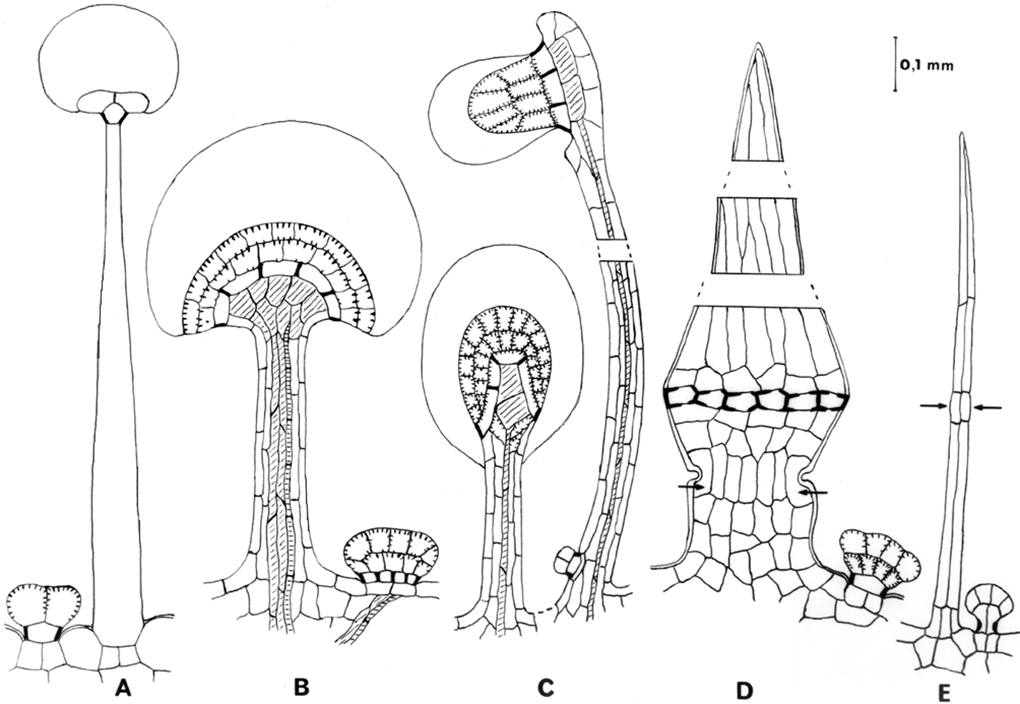 The diagram shows glandular hairs, tentacles, digestive glands, and trigger hairs in five genera of which the last four are all from the sundew family (Droseraceae). Gland cells with an enlarged inner wall surface (transfer cells) are shown with teeth. The cutinized walls of endodermoid cells are in bold (drawn thick?). Water transporting cells (vessels and tracheids) are hatched. Arrows mark mecano-sensoric cells. Adhesive slime is seen as a bobble above the glandular cells. 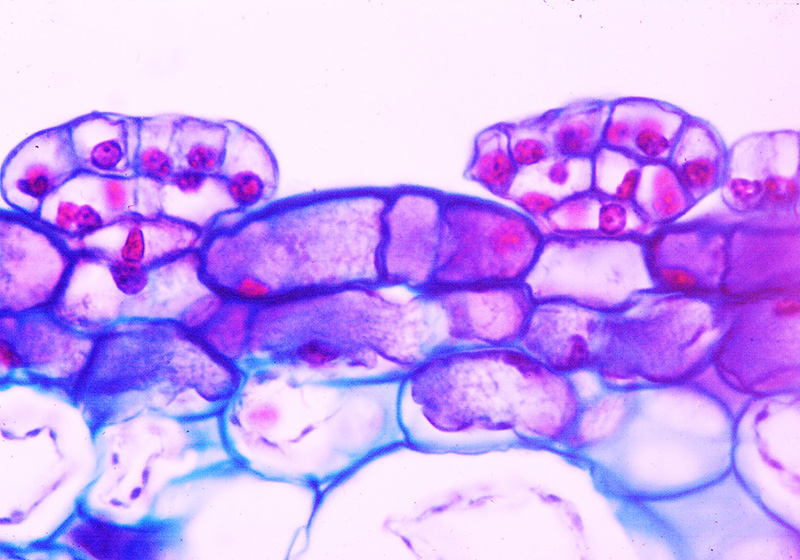 The digestive glands of Dionaea are constructed as in Drosophyllum with two layers of glandular cells equipped with labyrinthine cell-walls, which primarily seem to play a role during absorption of the nutrients. The glandular cells have large nuclei and they are rich in cytoplasm and organelles, first and foremost mitochondria, which provide the energy to run the secretion- and absorption processes. They are also rich in endoplasmic reticulum covered with ribosomes for synthesis of the digestive enzymes. There have been found peroxidase, esterase, acid phosphatase and protease (as in Drosera) and furthermore ribonuclease and small amounts of amylase. The amylase decomposes plant starch and its presence in the digestive fluid is therefore difficult to interpret. The fluid contains furthermore hydrochloric acid and a number of different metal ions.

As in all other air-exposed digestive glands a chemical stimulation is required before Dionaea releases the digestive enzymes. Furthermore, the secretion is intensified during the slow part of the trap closure, the more often the prey touches the trigger hairs. If the mechanical stimulation is absent both the complete closure and the enzyme secretion will also be absent, and the trap will reopen after about a day. Therefore feeding with a dead fly will normally not initiate the digestive processes, while a strong chemical stimulation with sodium ions and nitrogen compounds from a piece of salted or cooked ham will start a so strong secretion and compression of the leaf lobes that the digestive fluid flows out between the teeth of the trap even if the trap has only been mechanically stimulated twice as needed to release the closure mechanism. During a natural course of capture uric acid from the prey will provide the chemical stimulation. 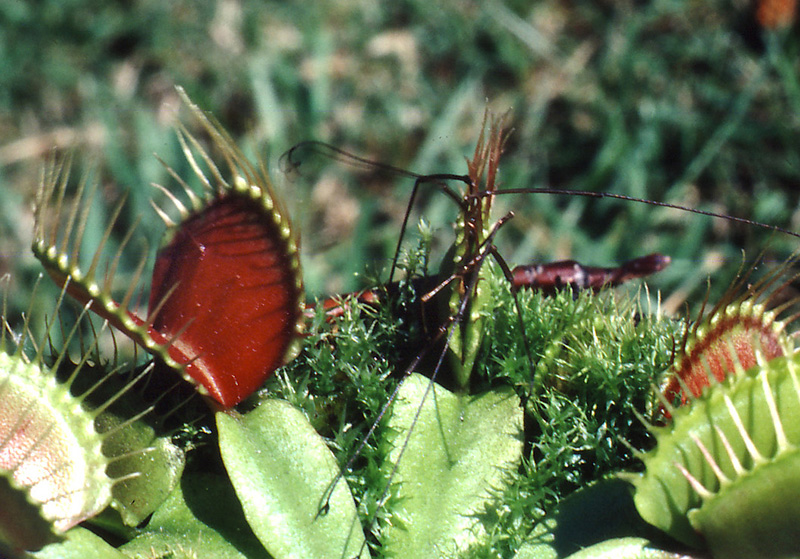 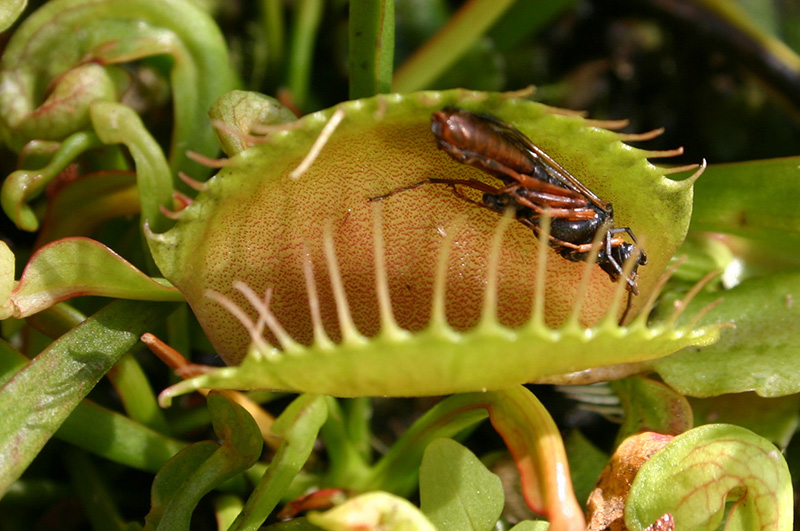 The fox-traps of Dionaea are recycling traps and the digestive glands undergo changes in both fine structure and function in a cyclic course, where the length of each phase depends on the size of the prey. The total turnaround time is on average 10 days, but the digestion of a large prey can be so energy demanding that the trap may only go through one cycle and not reopen after which the leaf withers. During the resting phase the labyrinthine cell-wall is most well developed in the inner layer of glandular cells, while protein inclusions are present in the larger vacuoles in both layers. The protein is considered precursors to the digestive enzymes, which in the finished version are stored in smaller vacuoles derived from the endoplasmic reticulum. No earlier than 17 and no later than 36 hours after the trap has been activated, measurable amounts of chlorine ions and protein-cleaving enzymes are present between the leaf lobes, and on the 4th day the secretion reaches its maximum.
Some degradation has been found along with some reorganization of the labyrinthine cell-walls during secretion, and it is possible that temporarily released polysaccharides participate in establishing an osmotic driven water stream, which the enzymes follow out through the cell-walls of the glandular cells. The cuticle is passed without problems since as soon as the gland is stimulated, permanent perforations are formed either as a consequence of an osmotic regulated increase in pressure in the glandular cells or as a consequence of acid growth (explained for Drosera but so far only on the Danish pages).
Since the secrete does not contain polysaccharides the dictyosomes are not involved in the secretion process but they deliver material to build the labyrinthine cell-wall which result in a large increase in the area of the cell membrane and that is considered to facilitate absorption of the nutrients. The nutrients pass the porous walls of the glandular cells by diffusion following a concentration gradient, which is maintained as a consequence of a the energy demanding  transport of nutrient ions assumed to occur across the cell membrane in all glandular cells. Then cytoplasmic streaming and diffusion through plasmodesmata provides for further distribution of the nutrients. Hence secretion and absorption occur simultaneously and to that in a cyclical course accompanied by characteristic changes in the fine structure of the cells. Thus Dionaea represents one of the most complicated digestive glands. When the trap opens after digestion wind and rain will remove the dried up chitin skeleton so the trap can be reused. Bacteria and other microorganisms often lands on the traps and they can participate in the degradation of chitin.

Return to Dionaea or to Carnivprous plants