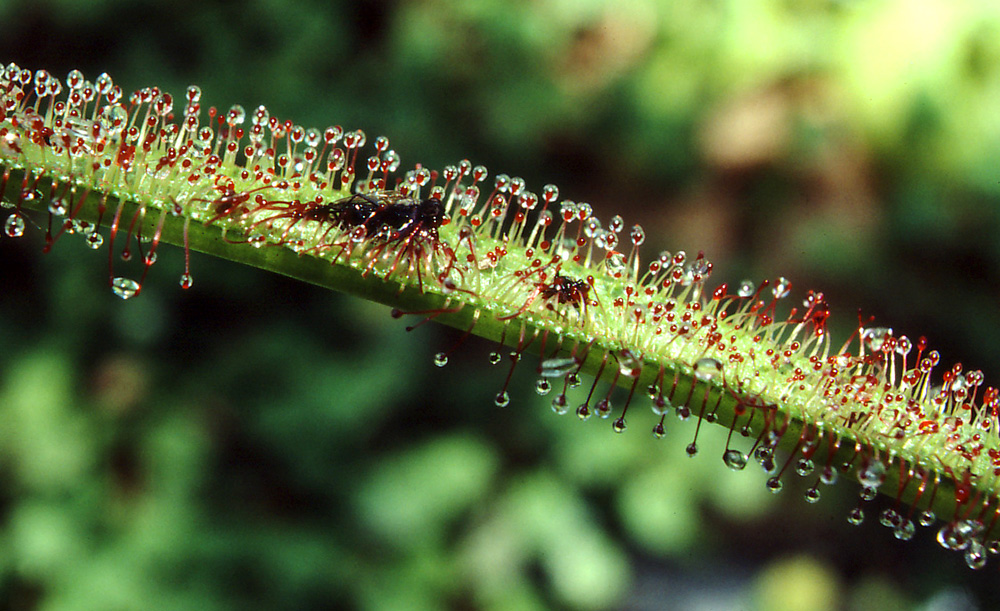 The Drosera trap can be compared to flypaper or a glue stick since the tentacles secrete at sticky slime functioning as a glue when a prey lands on the leaf. Above, you see a leaf of the South African Drosera capensis with two digested insects. The tentacles are bent over the prey from all sides. The tentacles on the leaf margin have been mechanically stimulated by the prey and they are bent perpendicularly over the prey. The other tentacles are bent over the prey after chemical stimulation with uric acid from the prey. In connection with the mechanical activation of the tentacles electrical impulses are generated called receptor- and action potentials. The impulses spread from cell to cell to the base of the tentacle stalk and trigger chances in the cell membrane permeability so that hydrogen ions flow into the cell walls on the side of the tentacle that is turned away from the leaf axis (center). The hydrogen ions lower pH in the cell wall thereby activating hydrolytic enzymes stored there. It loosens the chemical bonds which normally keep the cellulosic fibrils in fixed positions. Then the softened cell wall becomes stretched a little in consequence of the hydrostatic pressure of the living cell, and the outer side of the tentacles is extended relatively to the inside, and the tentacle bends. Receptor- and action potentials can be measured by placing an electrode on a tentacle and another one at the leaf base. The generated voltage differences are in the order of 50 mV. A catch episode often ends with the lamina enrolling partly or completely as a consequence of acid growth and the purpose is to get as many tentacles as possible in contact with the prey.

Return to Drosera or to Carnivorous plants.