Utricularia alpine (= U. montana) with elliptic to oval leaves. 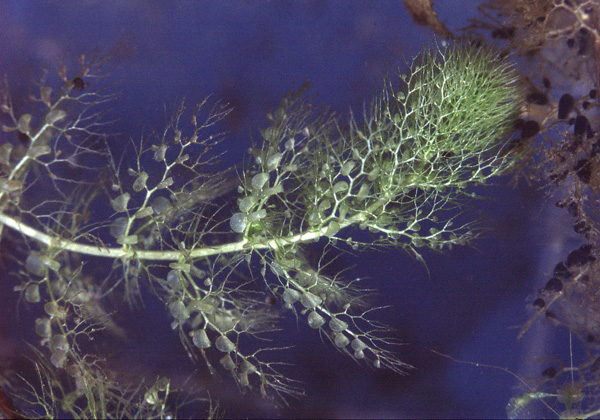 As already mentioned, Utricularia are rootless plants regardless of where they live. All species have green leaves with photosynthesis but leaf morphology varies considerably depending of the growth media. All aquatic bladderworts have strongly dissected leaves with linear segments as shown above while terrestrial/epiphytic species have entire leaves. In northern latitudes, the aquatic species at the end of the growing season form a compact collection of leaves around the shoot tip called winter buds, hibernacula, or turions. These buds detach from the rest of the shoot, which wilts and they sink to the bottom or freeze into the ice, but they survive the winter and produce new shoots in the spring, and hence the plant is perennial. In some species from the tropics and sub-tropics, the hibernaculas are able to resist draught through several months without losing more than 6% of their dry weight. The bladder of cause are part of the vegetative parts and they are described on a separate page.

The species growing in swamps or as epiphytes have flat entire leaves for photosynthesis. Three examples with great variation in form and size are shown on this page. Some species produce runners (stolons), which probably shall be interpreted as modified leaves. They may have bladders as shown for U. alpina and U. sandersonii. They are also equipped with slime glands and can function as attachment organs in species from Brazil and West Africa. In U. alpina and others part of the runners produce bulbs. They do not contain starch and are not storage organs for nutrients but for water. The entire bulb is used for water storage since there is no intercellular space between the cells.  Species with bulbs are mostly living as epiphytes in moss cushions where the risk of drying out over several days may be relatively great. In such a situation, the bulbs will shrink. Finally, the South-American U. nelumbifolia, living in Bromeliad water tanks, uses the runners for vegetative propagation, since the runners can ‘wander’ from tank to tank. Darwin observed six Tillandsia tanks connected by runners from U. nelumbifolia.

In some species such as U. inflata and U. radiata, runners form a wreath at the base of the flower stalk. The wreath functions as a floating device since it is swollen and hollow. Although most species are small, there are some like the Brazilian U. longifolia where the lanceolate leaves may be more than one meter long, and a shoot on the Danish free-floating species may also be a meter long.

Return to Utricularia main page or to carnivorous plants