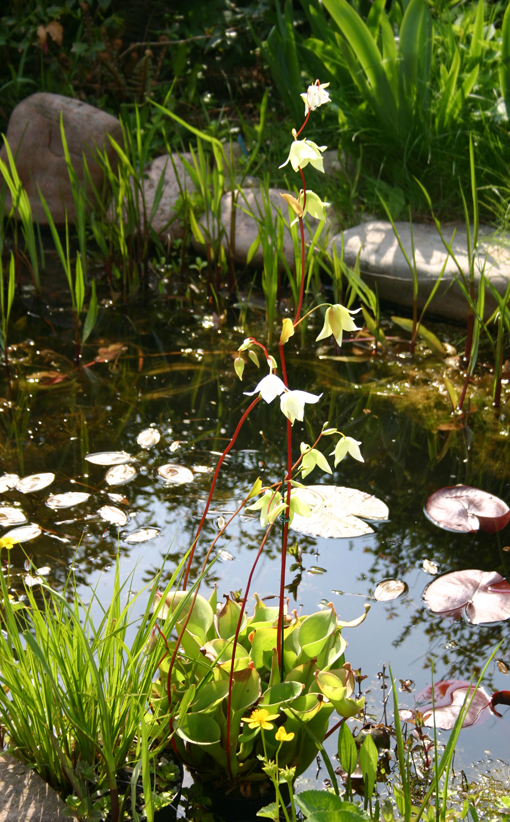 Heliamphora – is considered the most primitive genus of carnivorous plants in the family Sarraceniaceae. The name is derived from Greek ‘helos’ for meadow or swamp and ‘amphora’ for pitcher. The number of recognized species has doubled in recent years, when the plateau-mountains (tepuis), difficult to access in southeastern Venezuela and adjacent areas in Guyana and Brazil, have been better explored. At least 15 species are now known which all grow above 1200 m, while the majority grows between 1,800 and 2,800 m.a.s. on the flat-topped tepuis. The annual precipitation in the area varies between 8,000 and 12,000 mm and the top of the mountains are despite their height free of frost.

The lifecycle of the perennial plants and the construction of pitcher-shaped leaves functioning as pitfall traps correspond to Sarracenia. The pitchers are thought to have arisen from ancestors with heart-shaped leaves growing faster on the lower (abaxial) side than on the upper (adaxial) side making them funnel-shaped. The leaf edges have grown together over time making the pitchers able to collect rainwater, and insects in particular have drowned and then they slowly become dissolved by bacteria. The released nutrients are then absorbed through the epidermis of the leaf and a primitive carnivorous plant has developed. Today’s Heliamphora has not reached much further in evolution, and besides enzyme secretion has not been proven with certainty, another primitive character is that the leaf edges are only weakly fused and at low light intensity the pitchers do not develop and the leaves continue to be flat and only serve the photosynthesis. Furthermore, the lid is of modest size, which is an advantage since the pitchers must collect rainwater, and an umbrella effect from a larger lid would be inappropriate. However, Heliamphora tatai secretes enzymes and it has the largest lid although, it is still small in relation to the mouth of the pitcher. On the lower part of the pitcher a wing occurs as in Sarracenia, but the weakly fused leaf margins leave two free edges making the cross section Y-shaped. The pitchers have furthermore a narrowing slightly above the middle and just above this narrowing the pitcher edges are free forming a drain or overflow hole, which prevents the pitchers from becoming so filled with water that they topple or break together under the weight. The drain may also be a slit continuing to the top of the pitcher.

The course of the catch corresponds to the course of the other pitfall traps in the family. The outside of the pitcher and the lid is covered by nectaries producing a sweet scent. It attracts both flying and crawling insects. Lizards and frogs have also been seen in the pitchers, but they rarely end as prey since they hold to the pitcher edge and use the pitchers as a hide. The inside of the pitcher is covered by long downward pointed hairs and there is a waxy zone which together with the narrowing mentioned above makes it practically impossible to escape from the pitcher. Just above the water level most species have a wreath of  12 mm long hairs.

The colour of the flowers are white, pink or red depending on the species and the age of the flower. The anthers open by small pores and the pollen grains are only released in response to a low frequent buzzing tone from the wings of certain wasps and beetles. This prevents a waste of pollen during pollination. As in Sarracenia and Darlingtonia the pitchers are inhabited by different insects and microorganisms.

Click on the pictures below to get more information. 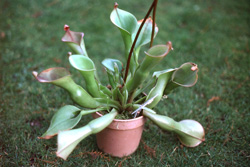