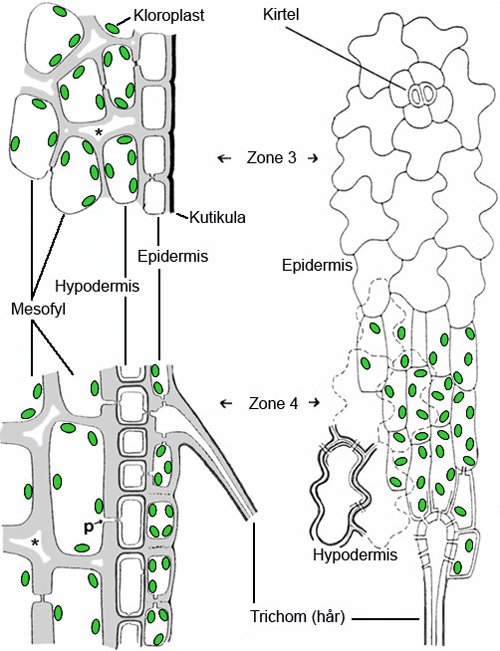 Above: Schematic longitudinal section of zones 3 and 4 (at left) and paradermal section of the same zones (at right). *, intercellular space. P, pore in the cell wall. The shape of the epidermal cells in zone 3 is repeated in the hypodermis of zone 4. The puzzle-piece shape increases the strength in the pitcher wall. The bold line in the hypodermal cells represents a suberin layer. 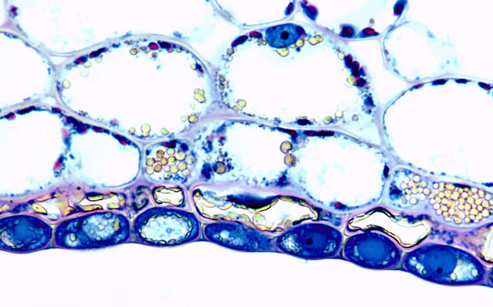 Above: A transversal section (light microscopy) of the pitcher wall in zone 4 shows the complete bottom zone epidermis, which can be interpreted as one large absorbing gland. The cells are rich in cytoplasm and have large nuclei, which is characteristic of glandular tissue. The next cell layer (hypodermis) functions as an endodermoid boundary layer controlling which components are allowed to pass through the living cytoplasm to reach the conductive tissue. In other words, the gland is constructed on the same basic plan as other glands including nectaries and digestive glands in the other carnivorous plants (see e.g. Nepenthes). However, the Sarracenia digestive gland does deviate from the other glands by only being absorptive and by containing chloroplasts (photo below) in some species. In S. purpurea the chloroplasts perform photosynthesis to the advantage of the symbionts in the pitcher fluid as described here. 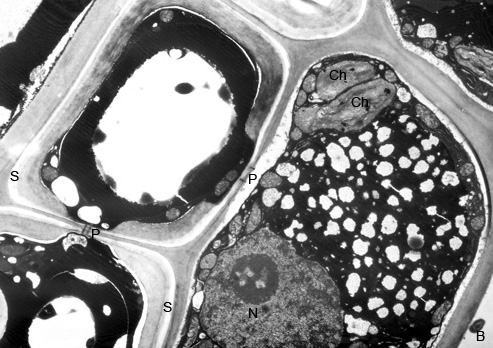 Above: Transversal section of a digestive gland from Sarracenia psittacina seen in the electron microscope. At right a glandular epidermal cell with nucleus (N) and two chloroplasts (Ch). Then follows the hypodermis (left) with a contactless suberin layer (S) in the cell wall. In the upper left corner, a mesophyll cell follows. B, bacterium in the pitcher fluid. P, plasmodesmata connect all cells but are only seen in two of the cell walls. The central vacuole of the cells is largely filled with tannins (appears black).

This page illustrates important anatomical features in the Sarracenia pitfall’s two lowermost zones. The differences are summerized in the left diagram and illustrated by photos below. It should be noted the presence of chloroplasts in the digestive gland has not been shown in all species. 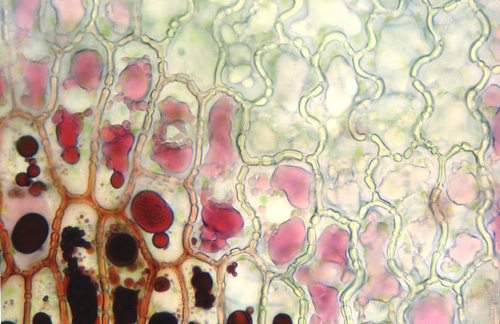 Above: Paradermal section of the inside of the pitcher in Saracenia purpurea placed at the transition between zones 3 and 4 (see diagram). The epidermal cells of zone 3 have form as pieces in a puzzle but the shape changes to be more rectangular in zone 4. Before preparation, the pitcher was filled with the stain neutral-red for seven hours. The sharp boundary between zone 3 and 4 is illustrated not only by the change in cell morphology but also by the uptake of the stain in cells from zone 4 (the digestive zone) but not in zone 3. The difference stems from the fact that the outer cell walls of zone 3 (gliding zone) are equipped with a thick, impenetrable wax impregnated cuticle, while this part of the cell walls in zone 4 is very thin and incomplete as shown in the photo below from the transmission electron microscope. 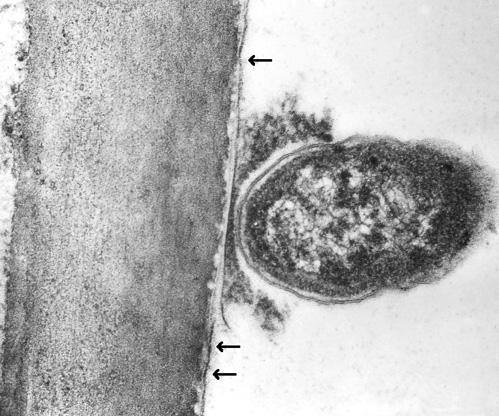 Above: Transversal section of the outer cell wall in an epidermal cell from the digestive zone (zone 4) seen in electron microscopy. The arrows mark places where the extremely thin cuticle is incomplete exposing the cellulose skeleton of the cell wall to the pitcher fluid. Therefore, nutrients from the pitcher fluid can enter the cell wall and be transported across the cell membrane (plasmalemma) into the cytoplasm through energy demanding active transport. A bacterium is sitting on the surface of the epidermal cell. 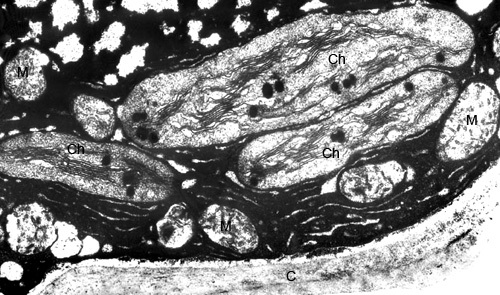 Above: Chloroplasts (Ch) of a Sarracenia psittacina digestive gland. The inner chlorophyll containing lamellar system is stacked in grana as normal in chloroplasts. The largest chloroplast is about 3 µm long (0,003mm).

Return to Sarracenia or to Carnivorous plants