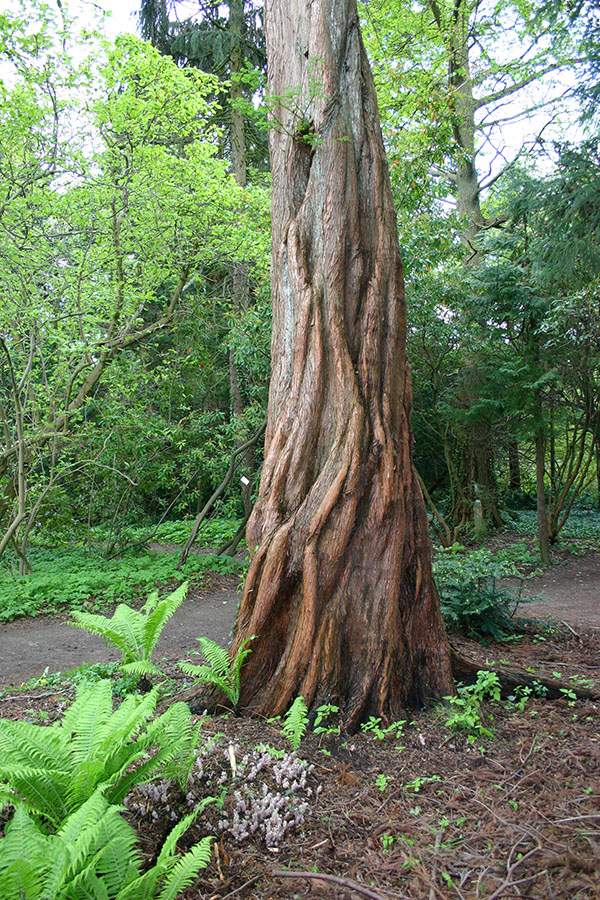 Fig. 1. Large population of Lathraea squamaria in from of the host (Metasequoia glyptostroboides) in Forstbotanisk Have, Copenhagen. The flowers are nearly wilted and therefore rather pale. 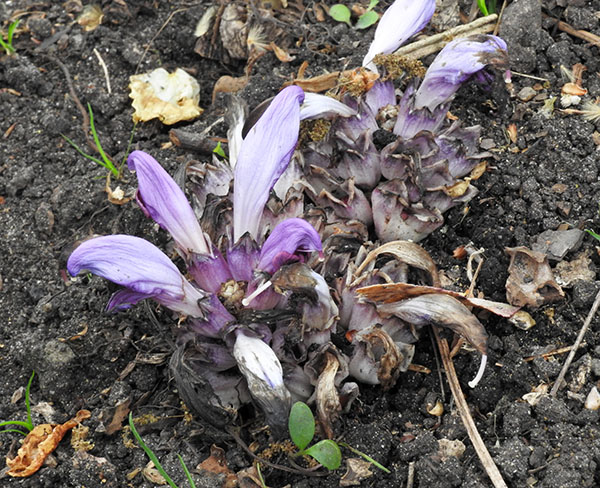 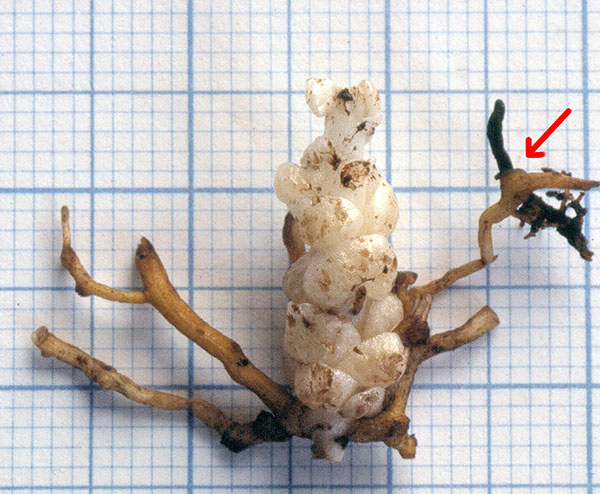 Fig. 3. Shoot of Lathraea clandestina where one root has a haustorium (red arrow) attached to the root of an Alnus sp. 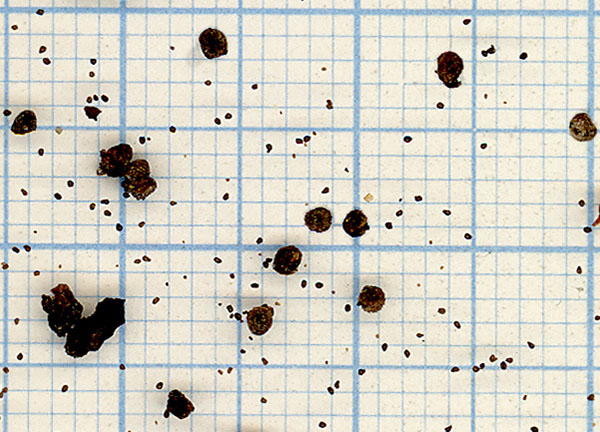 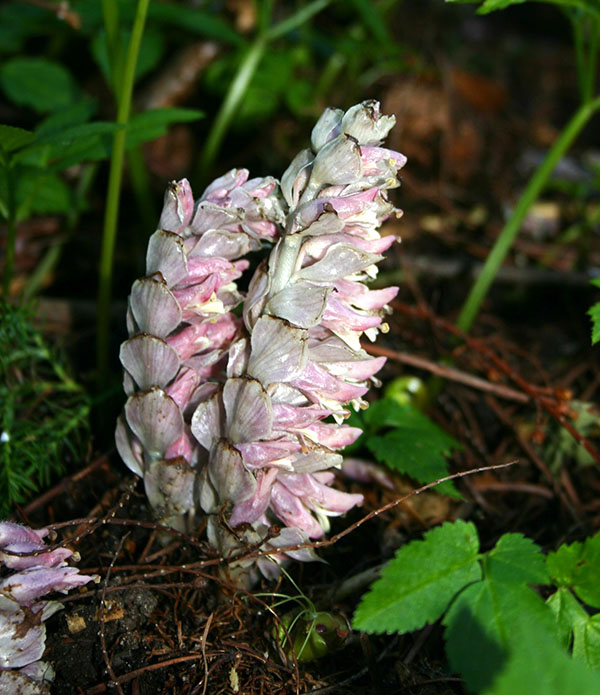 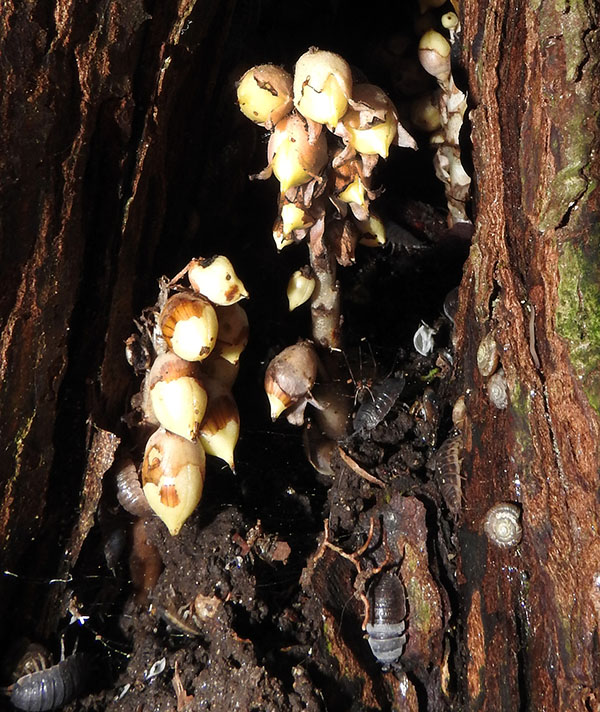 Fig. 6. Lathraea squamaria with ripe capsules, where the wilted corolla has fallen off. 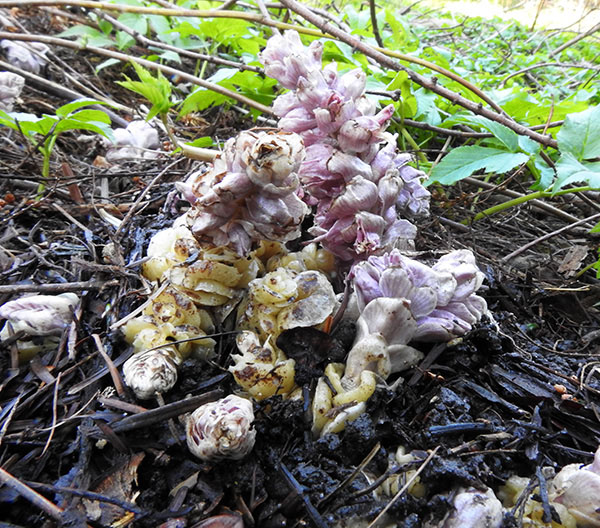 Fig. 7. Flowering shoot of Lathraea squamaria develop from the scale-covered rhizomes, which in this case are placed at the earth crust. The host is Metasequoia glyptostroboides. 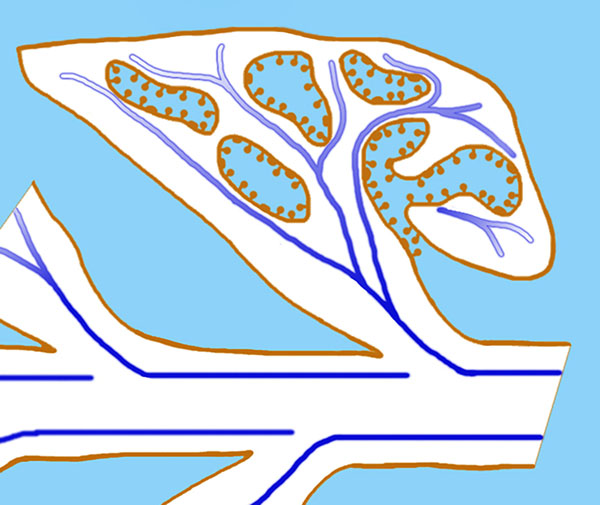 Fig. 8.  Diagram of the scale leaves of Lathraea squamaria seen as a longitudinal section with visible entrance to the labyrinth caves. The conductive tissue marked ad a blue line is located close to the hydathodes in the caves. 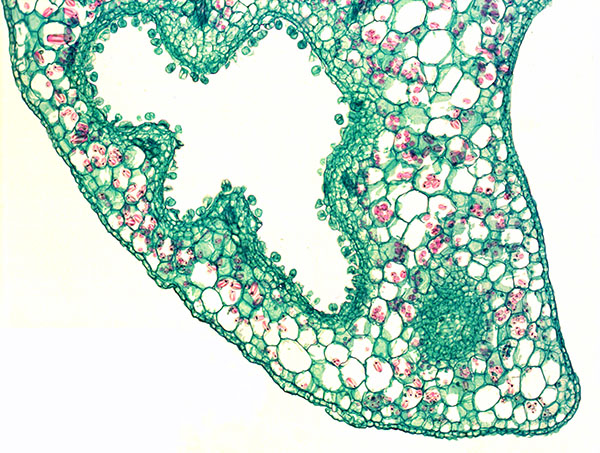 Fig. 9. Section through scale leave of Lathraea squamaria) with stalked and sessile water secreating hydathodes on the inner surface (epidermis) of the caves. 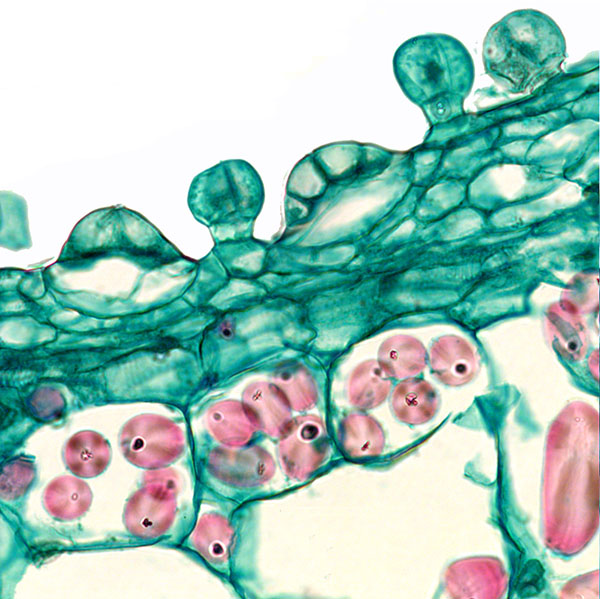 Fig. 10. Stalked and sessile hydathodes. In the latter the basal cell and four overlying cells of the sessile are visible. 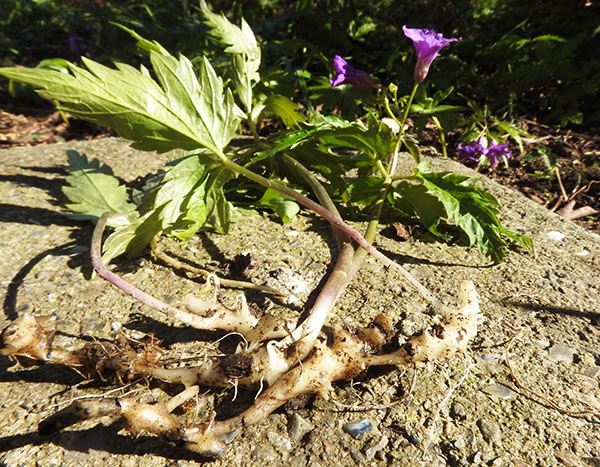 Haustoria are descibed in detail in:

Danish and other Nordic parasitic plant.

If you asks a random person on the street if there are parasitic plants in Denmark, someone might suggest the European mistletoe, Viscum album, and if at best, Cuscuta, Orobanche and even Lathraea may be mentioned by their popular names. One has to be profoundly interested in botany to mention other root parasites – it is understandable, since these hemi-parasitic root-parasites are green plants with photosynthesis as nearly all other flowering plants in the Danish flora. It is not immediately clear that the green hemi-parasites are attached to roots of host plants with haustoria able to transfer water and nutrients from the host to the parasite. The lack of attention can also be explained by the fact that parasitic plants are of no economic importance to farming, forestry or gardening in Denmark. That is in contrast to a number of African countries, where attack from Striga or Orobanche may reduce harvest yield to near zero or in North America where Arceuthobium species yearly cause loss of coniferous timber for millions of dollars. You can read more about that in Heide-Jørgensen 2008a. Toothwoort is a small genus with only seven species. They are all holoparasitic root-parasites, and only Lathraea squamaria occurs naturally in Denmark. In the following, this species is described in relation to different aspects of life as a parasitic plant.

For many years we have been used to Lathraea being placed in Scrophulariaceae but molecular biologists have now, based on DNA analysis, placed Lathraea and other parasitic plants from Scrophulariaceae, i.e. the subfamilies Rhinanthoidea og Bucheoidea, in Orobanchaceae. This family now includes both hemi- and holoparasites (Olmstead et al. 2001) besides a single non-parasitic genus (autotrof), Lindenbergia with 15 species in Africa and Asien (Bennett & Mathews 2006).

Root-parasites lacking chlorophyll and a ‘normal’ root system are holoparasites and hence very dependent on getting water and all nutrients from the hosts. However, Lathraea has some roots presumed to be able to absorb some water. As holoparasite it avoids competing with other plants about light.

Lathraea squamaria (Fig. 1) is present in most of Europe and occurs far into Russia and Turkey. In southern Scandinavia it is found in mould-rich deciduous forests, where Corylus, Alnus, and Fagus are the preferred hosts but is can also use Ulmus, Fraxinus and Juglans and the deciduous conifer (Metasequoia glyptostroboides, Fig. 1). In Europe, three of the seven Lathrae species are present but in Scandinavia only Lathraea squamaria. The still milder winters considered, there is a possibility for immigration and naturalization of the large flowered Lathraea clandestine (Fig. 2). It is primarily a western European species and numerous in France and Belgium with some populations in Holland, England and Scotland. It is relatively easy to establish as a garden plant by sowing seeds, but do not expect flowers the first 10-12 years. L. clandestina has nearly the same range of hosts as L. squameria, and for many years, it has done well in the Botanical Garden of Copenhagen.

Contrary to all other investigated holoparasites Lathraea does not produce a primary haustorium. Furthermore, the majority of the secondary haustoria dies during winter meaning new ones must be produced in the spring (Fig.3). (About haustoria, see Heide-Jørgensen 2003, 2008a & b).  Also unlike other holoparasites the seeds are large (up to 2 mm, Fig. 4) containing enough nutrients for the subterranean seedling to develop roots able to produce secondary haustoria. The growth is slow and it may take about ten years before L. squamaria is able to flower.

The terminal spike-like inflorescence has one-sided oriented unilateral symmetrical flowers Fig. 5), pollinated by bumblebees. The nodding flowers have 4 fused sepals and a two-lipped about 15 mm long corolla, 4 stamens and 4 carpels that form a unilocular capsule (Fig. 6) with only one seed. The flower colour varies from white to reddish or lilac. It happens that flowering occurs subterranean but if so the flowers do not open. At maturity, the capsule opens elastically and seeds are thrown from the capsule. The seeds are provided with an elaiosome rich in lipids and proteins attractive to ants. They eat the elaiosomes and thus spread the seeds further. Elaiosomes are also present in the hemiparasites Melampyrum and Pedicularis.

Lathraea squamaria has branched rhizomes, which may be found just below the leaf-litter (Fig. 7) but normally the rhizomes are placed deeper and up to 20 cm below the soil surface. The rhizomes are covered with fleshy scale leaves, formed by an invagination of the lamina producing a cave-labyrinth covered on the inside by glandular trichomes called hydathodes (Figs. 8-9). Since small earth living invertebrates as well as protein degrading enzymes have been found in the caves besides a great number of mitochondria being present in the hydathodes, it was earlier suggested that the hydathodes were digestive glands, and therefore L. squamaria was considered a carnivorous plant (Scherffel 1888, Kuijt 1969). However, this has been proven wrong.

Hydathodes are primarily water secreting glands and an energy-demanding pump secretes the water. This explains the large number of mitochondria needed to deliver energy to the pump in the form of ATP (adenosine-triphosphate). The need for active secretion of water shall be seen in the context of Lathraea not having above ground vegetative parts with stomata, which normally helps to keep water flowing through the conductive tissue (xylem) through evaporation from the leaves (transpiration). This so-called transpiration stream is necessary to keep the growing parts of the plant supplied with inorganic nutrients. Admittedly, it applies to most land plants to limit water consumption but a certain water flow is necessary to keep the plant in growth. Since in Lathraea the transpiration stream is taken out of action, the nutrient-containing water must be pumped through the plant and that is what the hydathodes provide. It is unknown why two structurally different hydathodes are present as shown in Fig. 10. The flat hydathodes consist of a basal cell and on top of this are four parallel cells, which may be interpreted as guard cells and subsidiary cells of a stoma, which has not completed normal differentiation and therefore has obtained a different function. In other investigated members of Orebanchaceae the stomata are placed on both sides of the leaf, but Lathraea lacks stomata (Kaplan & Inceoglu 2003). It is possible that the slow growth of Lathraea can be explained by the slow transport of nutrients.

No superstition or other folklore seem to be attributed to Lathraea squamaria, neither has it been used in medicine. The Danish popular name ‘skælrod’ (meaning scale-root) is misleading. The plant has scale leaves but they are not located on roots but on underground stems (rhizomes). The English common name toothwort is also problematic although wort is the same as herb and as such correct. Tooth refers to the scale-leaves looking like teeth, but in some English literature, toothwort refers to the genus Dentaria (Lange 1959). Carpathian toothwort (Cardamine glanduligera = Dentaria glanduligera) has small, scale leaves on the rhizomes (Fig. 11).