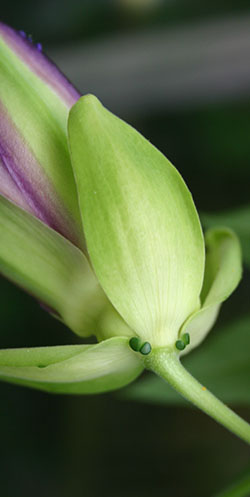 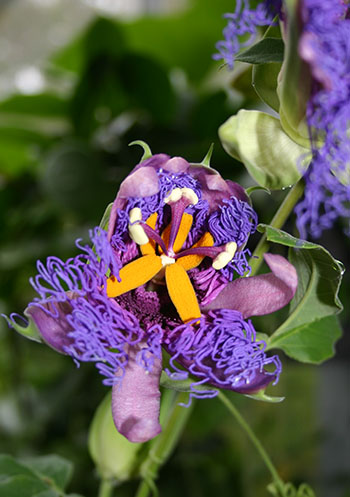 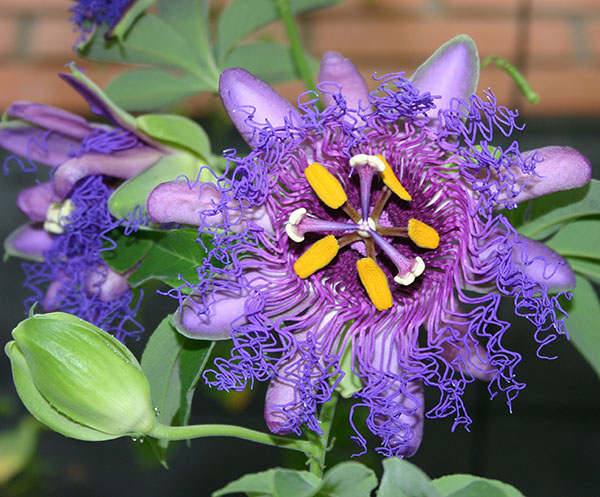 Passiflora cincinnata is opening early in the day. Notice extrafloral nectaries on the bracts.-

Half an hour later styles and anthers begin turning downwards. 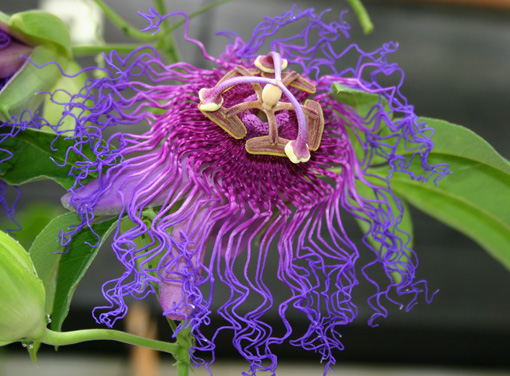 2½ hour after the bud opened both stigmas and anthers have turned around facing the corolla. 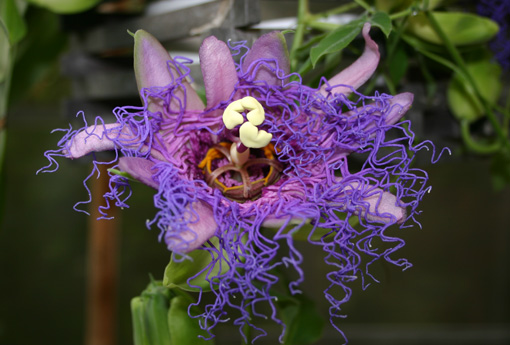 The same flower during closure next morning. The styles have returned to upright position.

Longitudinal section through the hummingbird pollinated flower of Passiflora racemosa with names for the different flower parts. White pollen are smeared over one of the petals. – Click the photo for enlargement.

The androgynophor and almost empty pollensacs are shown in a cut through closed flower with wilted anthers. – Click for a better view.

Three bracts are usually placed below each flower (see the bud above at left). The number is unusual since nearly all other flowering plant species have only two bracts as well as the most primitive Passiflora. Shape and size vary considerably, and the three bracts are in some species fused to form a bowl. Usually the flowers are only open up to 24 hours, but in a few Australian species and some species from the high Andes the flowers may be open for 2-3 days, while some bat pollinated species are open only a single night. Both the anthers and the stigma perform movements. Immediately after the flower bursts into bloom in the insect pollinated species, the pollen sacs open and within a few minutes to half an hour the anthers turn so the open pollen sacs are pointed towards the corona (Figs. at left), while in the hummingbird and bat pollinated flowers the anthers stay in the upright position (see P. racemosa further down this page). When the flower opens, the three styles are upright and stay in this position for about two hours. During this period self-pollination does not usually occur in species that otherwise are able to do so. Later on, the styles bend to bring the stigmas to the same level as the anthers, and a nectar seeking insect  with pollen grain on its back from another flower can now transfer them to the stigmas. In some species self-pollination is now also possible to ensure fruits are produced. Before the flowers close and wilt, the styles return to the upright position in most species.
The flower size varies from species to species between 1-20 cm in diameter. The flower is 5-merous  with 5 calyx leaves (sepals),  which in many species are keeled with a more or less hook-shaped beak at the tip (apex). In most species the calyx is green on the outside while the inside has the same color as the five petals. In some species (e.g. P. racemosa) the sepals have the same color as the petals both on the inside and outside. The basal parts of the sepals and petals are fused to form a tube which depending on its length also may be cup- or bowl-shaped.  The basal part below the so-called operculum, where the nectar is produced and stored, is in fact an extended stem formation called a hypanthium. The flower is perigynous. The lid (operculum) can be interpreted as the innermost wreath of the corona, but it has its own name due to its special function and different construction. While the other wreaths of the corona usually are mutually free outgrowths (filaments) from the corolla tube, the operculum usually consists of more or less coalesced filaments and it is best described as a membrane with a frayed edge, which bends towards the central column called the androgynophor (explained below).
Operculum functions as a lid protecting the nectar from smaller insects, which are unsuitable as pollinators, and in pending flowers the nectar is prevented from dripping out of the flower. The other wreaths of the corona are clearly separated from the operculum although they are placed closely together. The number of wreaths varies with the species. The outermost wreath has the longest filaments. It or the innermost wreaths may be more or less membranous. The function of the corona is to attract pollinators visually by its coloration and with emission of fragrance. Furthermore, the corona functions as a landing site for pollinators and it has influence on which visitors are able to reach the nectar and simultaneously obtain contact to the anthers and stigmas. The androgynophor is a central column in the flower consisting of the five stamens which to some length are fused to a tube, and the tube is to a greater or lesser degree fused with the stalk of the ovary. The length of the tube varies with species but is longest in hummingbird- and bat pollinated flowers. These species also have a tendency towards asymmetry so the anthers turns in the direction giving the pollinator the easiest access to the flower. The outer part of the stamens is free and bears the anthers. On top of the ovary are three styles with large head shaped or forked stigmas. Usually there are three carpels, but species exist with four carpels and four styles. The ovary has one room and the ovules are placed in three (or four) placentas along the fused edges of the carpels. The threshold (lime) is a ring-shaped outgrowth from the stamens at the bottom of the androgynophor. This outgrowth has the same function as the operculum. The threshold is not clearly developed in P. racemosa and it is not marked in the Figure.
As mentioned, the flowering only lasts for about 24 hours. Above is the same flower shown of the small-flowered Passiflora Colinvauxii photographed at 13.22, 20.11 and the next day at 15.27 o’clock. Shortly after opening the sepals and petals bend completely backwards (except for one sepal which is blocked by the flower stalk). At closure the stigmas return to the upright position as in most other species. 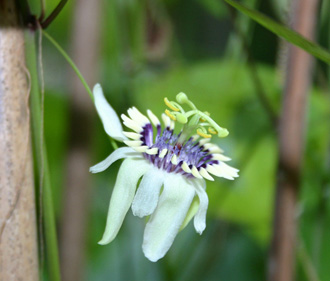 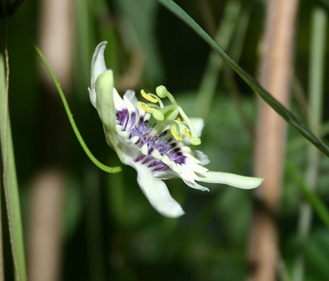 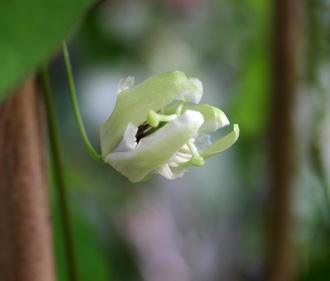 As mentioned, the flowering only lasts for about 24 hours. Above is the same flower shown of the small-flowered Passiflora colinvauxii photographed at 13.22, 20.11 and the next day at 15.27 o’clock. Shortly after opening the sepals and petals bend completely backwards (except for one sepal which is blocked by the flower stalk). At closure the stigmas return to the upright position as in most other species.