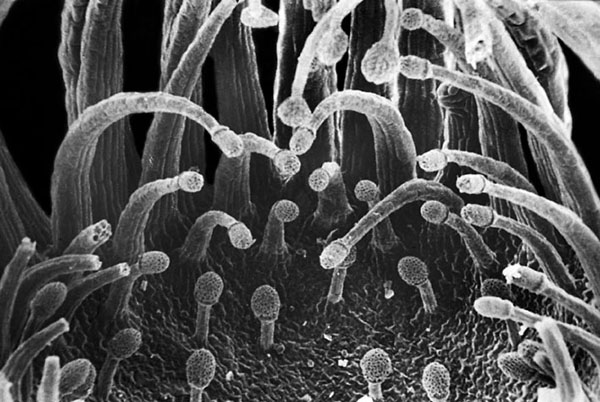 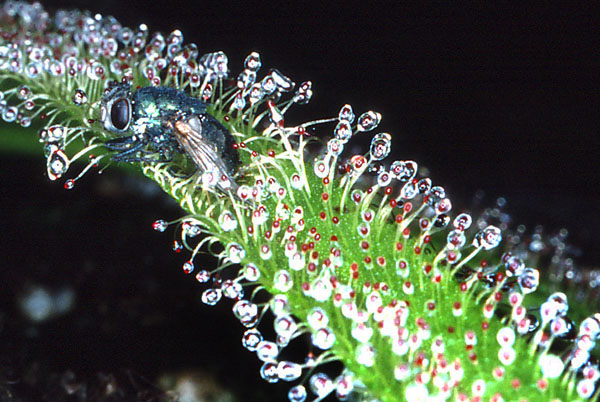 All Drosera species have two types of tentacles, long-stalked movable tentacles on or near the margin of the lamina and short-stalked more or less immovable tentacles in the center of the lamina. Left photo is D. pygmaea and right photo is D. regia. On the transition between short and long tentacles intermediary forms may occur. To some degree there is a division of labor between the two tentacle types. The long-stalked primarily secretes slime to retain the prey, while the short-stalked primarily secretes digestive enzymes and absorb the digested products. 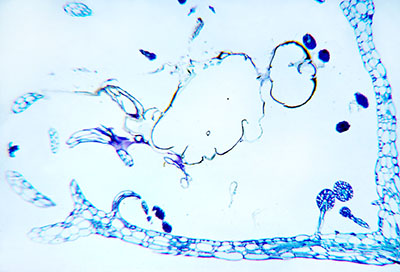 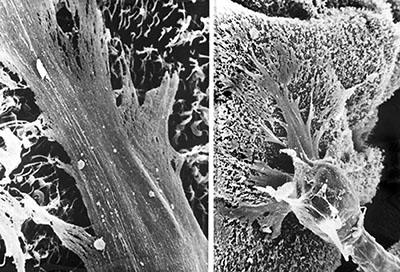 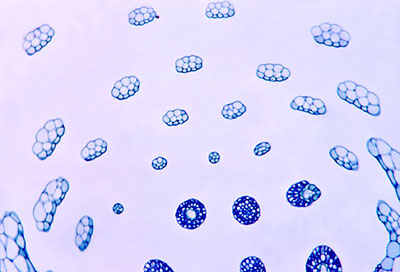 Whiteflies trapped by Drosera pygmaea. Sticky slime stained lilac is seen between a pair of tentacles and the prey. The middle SEM picture shows the slime stretched over the whitefly from the head of an intermediary tentacle. At right, a cut through a young trap shows cross sections of the stalk of long-stalked tentacles above and sections through the glandular head of short-stalked tentacles below. 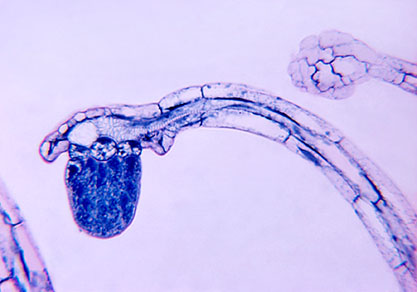 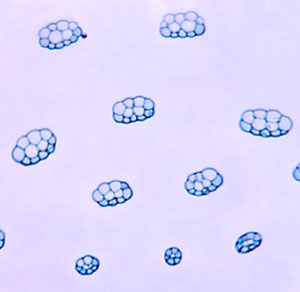 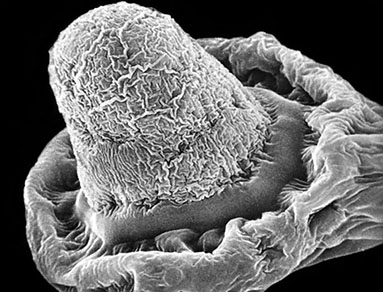 Longitudinal section of long-stalked tentacle of Drosera pygmaea. The water transporting xylem is visible in the outer part of the tentacle stalk. It ends with two large tracheids in contact with the endodermoid cells departing the tracheids from the cytoplasm rich glandular cells. The middle figure shows transversal sections of long-stalked tentacles illustrating that the cell walls on the abaxial side (facing away from the center of the trap) are thinner than the cell walls on the adaxial side. The thin-walled cells are easier to stretch by acid growth and that causes the tentacles to bend towards the center of the trap. At right a scanning photo of a laterally positioned head of a long-stalked tentacle. The circular area with smooth surface marks the endodermoid cells. 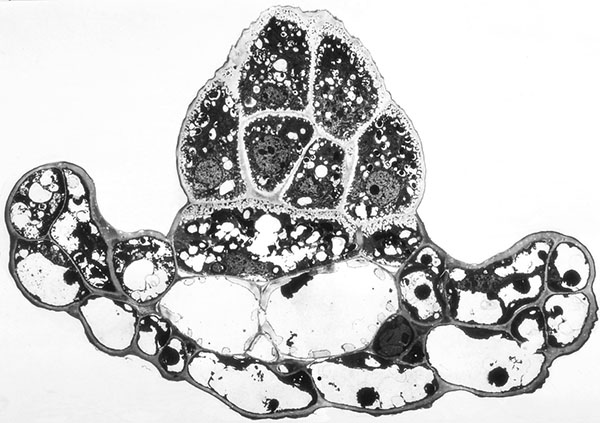 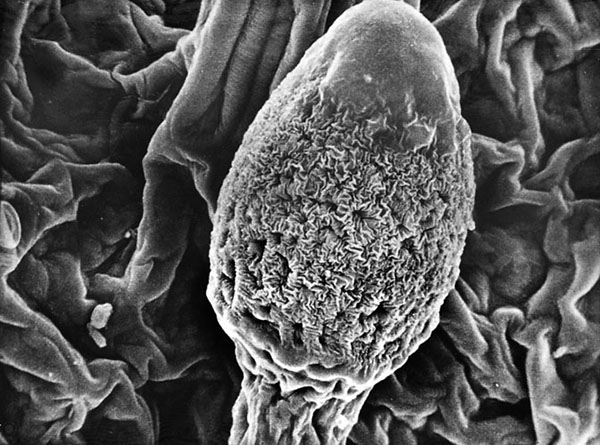 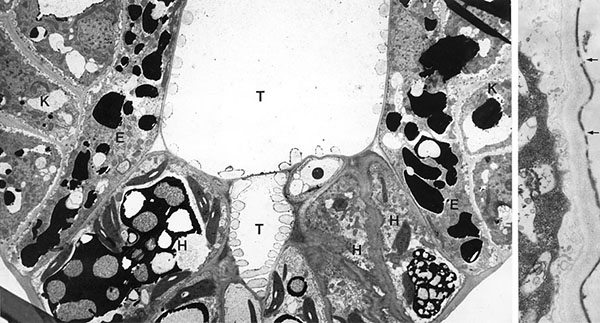 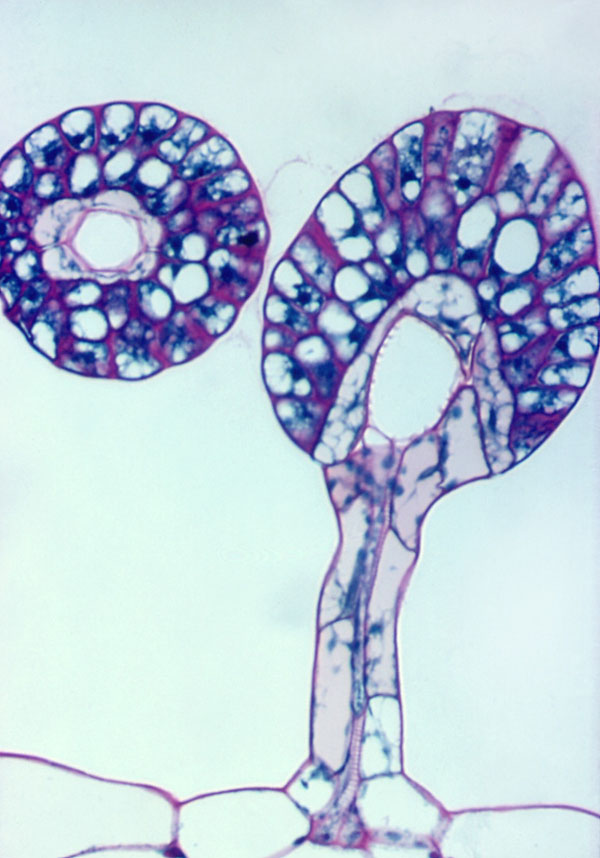 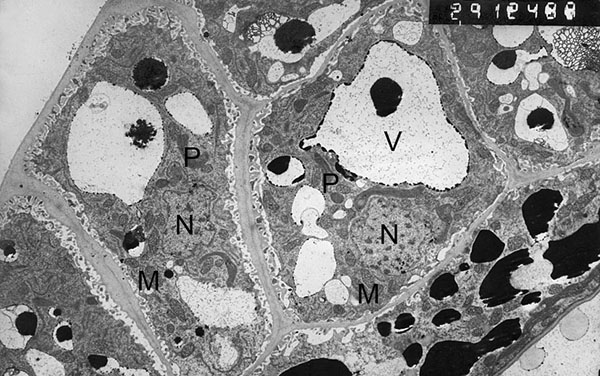 Tentacle structure in Drosera pygmaea. At upper left a peripheral section is shown  through the glandular head of a long-stalked tentacle with clear labyrinth walls in the cytoplasm rich glandular cells, and below two endodermoid cells are two tracheids with supporting secondary wall-thickenings. The other photos are from short-stalked tentacles. On the middle left scanning photo slime is accumulated under the cuticle, which is stretched and therefore looks smooth on top of gland head. The upper right photo is from the light microscope and shows a transversal section through a gland head and a longitudinal section through an entire tentacle consisting of a stalk with a central string of water transporting tracheids ending in a large central tracheid in the tentacle head. A corresponding cell is also seen on the transversal section. It is surrounded by a bell-shaped boundary layer of endodermoid cells, which regulates transport between the stalk and the two layers of glandular cells in the head. The tentacle secretes enzymes for digestion of the prey and then absorbs the degradation products. At the lower left an electron microscopic photo is seen corresponding to the photo from the light microscope. The inserted figure shows the perforated cuticle of the glandular head (small arrows). At lower right is a section of the glandular cells with labyrinth cell walls, which increase the area of the inner wall surface and thereby the cell membrane many times. E, endodermoid cell. H, neck cell. K, gland cell. M, mitochondrion. N, cell nucleus. P, plastid. T, tracheid.

Return to Drosera or to Carnivorous plants.