How to grow the Giant Lily (Cardiocrinum giganteum) 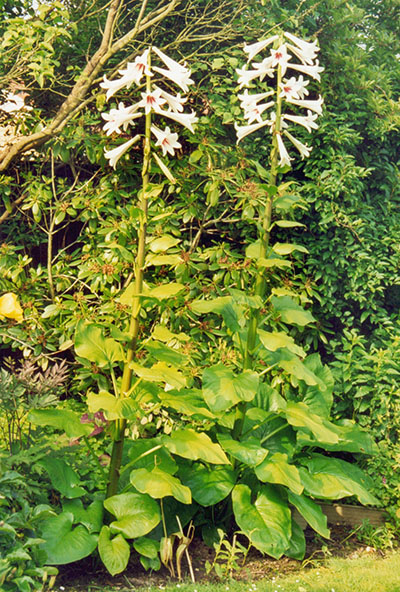 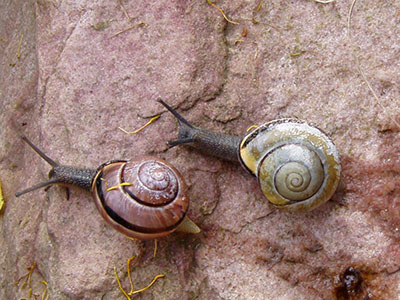 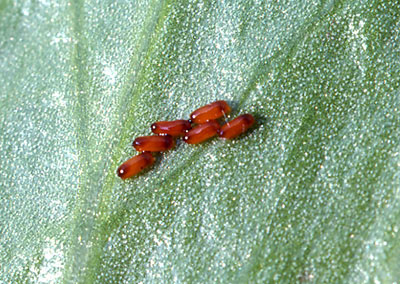 Eggs of the lily-beetle adhering to the lower side of a Cardiocrinum leaf. 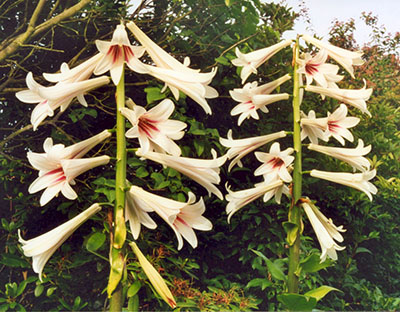 Two inflorescences of Cardiocrinum with 13 and 18 flowers respectively.

Cardiocrinum giganteum (Liliaceae), known as the giant Himalayan lily or just giant lily occurs in the Himalayas and may reach a height of two-three metres with almost 20 cm long fragrant trumpet-shaped flowers and large heart shaped leaves. In Denmark, Cardiocrinum flowers for up to two weeks in July depending on the numbers of flowers. The middle flowers of the raceme open first. The buds have an upright position in the raceme while the flowers in the beginning are oriented perpendicular to the axis but later on become hanging. After flowering the fruit stalk increases in length and bend upwards to a position similar to that of the buds. The bulb consists of just a few highly succulent bulb scales. It may obtain a diameter of about 20 cm. The genus has up to five species depending on, if some of the species are considered belonging to the genus Lilium or not.

Growing instructions:
Cardiocrinum does not tolerate standing water around the bulb or the roots. Therefore, best results are obtained in a well-drained but moisture preserving and nutrient rich soil. The plant should also be protected against strong winds and full sun to avoid sun burning of the large leaves. Place the bulb with the top just below the soil surface and protect it against hard frost during winter. If the soil is not suitable, dig a hole 1½ spits deep and similar in width. Mix the top-soil with compost or leaf mould and either a little sand, leca or crumbled bark for drainage. Cardiocrinum is a nutrient demanding plant and adding natural manure or ordinary lawn fertilizer in the spring will pay off. Distance between the bulbs should be about 70 cm.

Garden snails eat the young growing leaves and small holes will turn into large holes when the leaves are mature. Snails can be kept away from the young leaves with a ring of garlic-paste around the base of the plant. It may also be effective to water around the plant with garlic-water. The lily-beetle (Lilioceris lilii) sometimes attacks Cardiocrinum but seems to prefer the narrow leaved lilies if such are in the neighbourhood. In Denmark, the beetles appear in early April, i.e. before the first leave of Cardiocrinum begins to unfold. Although, the shiny red beetle is beautiful the lily beetle should be controlled manually. Insecticide like pyrethrum is said to be effective but is not recommended here. Water voles will eat the bulbs and if you have water voles in the garden it is probably not worth to try growing Cardiocrinum.

The main bulb will die after flowering but before dying, it will produce accessory bulbs. These bulbs can be planted in the autumn or next spring and they will flower within three to four years. If the late summer is long and warm, the seeds may become ripe and be able to germinate. However, a seed plant may take up to seven years before flowering. Cardiocrinum is not particularly well suited for growing in pots if the purpose is to see it in flower.

The giant lily is not always for sale but search the WEB for Cardiocrinum. Depending on where you live, you may find both prices and a dealer near your area. The price depends on the size of the bulb. 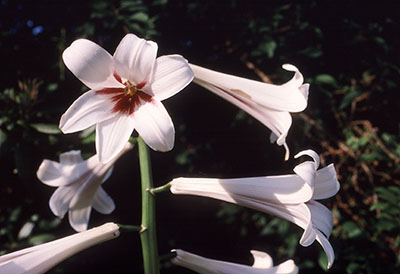 20 cm long Cardiocrinum flowers seen in front and side view. 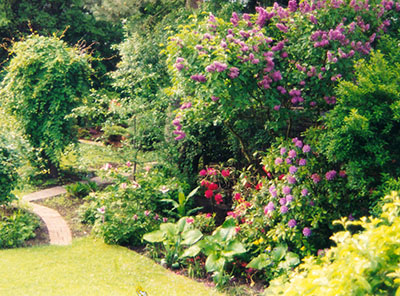 Fully developed rosettes of Cardiocrinum in front of flowering lilac and Rhododendron in early June. 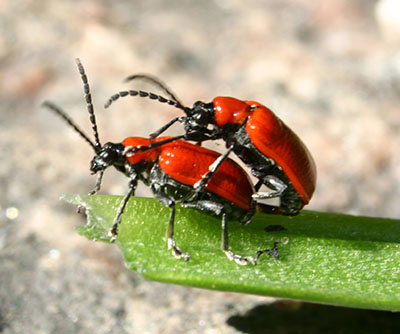 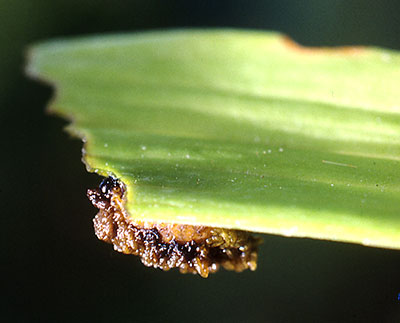 A lily-beetle larva protecting itself by placing excrement on its back. The larva eats a lily leaf backwards from the tip of the leaf.