Cephalotus follicularis with a 45 cm long inflorescence and two pitchers. 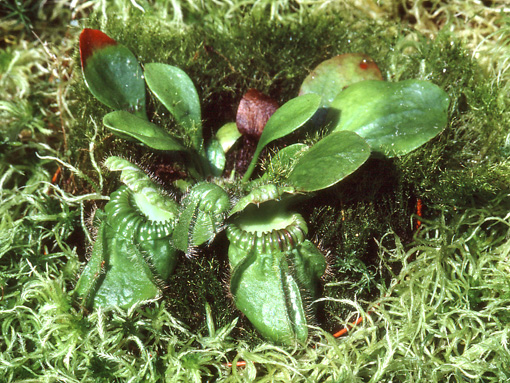 CEPHALOTUS is a monotypic genus, i.e. with only one species C. follicularis, which also is the only species in the family Cephalotaceae. The genus name originates from the Greek word kephalotus meaning ‘with a head’ and it refers to a gland on the stamens (click on the flower photo below). The epithet follicularis is derived from Latin folliculus meaning bag or sack and it refers to the shape of the sack- or pitcher shaped leaves which functions as pitfall traps. C. follicularis is only found in Southwestern Australia in an about 50 km broad zone along about 400 km of the coast. The climate is Mediterranean and during winter, the temperature does not fall below zero. The plant prefers acidic peat-like or sandy soil with high humidity and it will tolerate water-saturated soil during winter. Open, low vegetation is preferred but it does tolerate moderate shade. If a population is subjected to shadow during several years, the ability to reproduce is lost and the population will not survive competition from the surrounding vegetation. The oldest collection of C. follicularis is from 1802.

Cephalotus follicularis is a rosette plant with two types of leaves, partly flat leaves produced in the autumn and used for photosynthesis, partly pitcher-shaped leaves which function both as pitfall traps and as photosynthetic organs. The pitchers are produced in the spring and fully functional during summer when prey are must abundant. During the coldest winter months, the plant is at rest. Both the flat leaves and the pitchers are rarely more than 5.5 cm long. The plant is perennial and have runners producing new rosettes.

Cephalotus pitchers are the smallest of all pitfall traps and their position in level with the ground surface indicates the prey is primarily small crawling animals. It is documented that the pitchers themselves produce protease and acid phosphatase, but it is assumed that enzymes from bacteria are an important help to the digestion of the prey. The pitcher is in principle developed as in Nepenthes by an invagination of the upper (adaxial) side of the leaf, while the lid initiates as a transverse fold close to the leaf tip. In Sarracenia the lid originates from the leaf tip itself. In all three genera, the lid is immobile when fully developed.

The pitchers attract the prey with nectar, scent, coloration, and hairs particularly connected to the lid and three wings along the outside of the pitcher. The pitcher edge (peristome) is equipped with a number of smooth, pointed nectary supplied teeth, which curve inwards and downwards. The prey easily loses foothold on the teeth and falls into the pitcher where it eventually will drown in the pitcher fluid. The inside of the pitcher is equipped with a hairy downward directed collar (or roof beard) and a waxy smooth zone which makes it very difficult if not impossible to escape from the pitcher. The digestive glands are placed on two boat-shaped dark elevations or gland patches near the bottom (click on photos below). It is most likely from these areas the pitcher fluid is produced. The complicated construction of the pitchers indicates other species have existed as intermediate stages but they are all extinct.

The inflorescence is a compound raceme with cymose side branches and it excels by an unusually long shaft for such a small plant (up to 90 cm long). This marked spatial separation between flowers and traps prevents pollinating insects from becoming prey in the traps. The small white flowers contain nectar and therefore they are presumed to be insect pollinated but self-pollination is also possible. There are six free pods per flower. The 4 mm long pods are spread by the wind but are also able to float on water.

Click on the photos below to get more information.