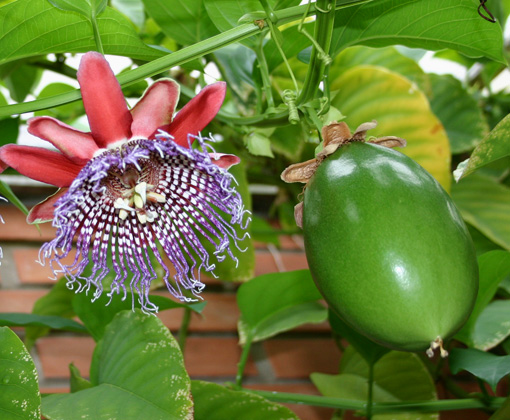 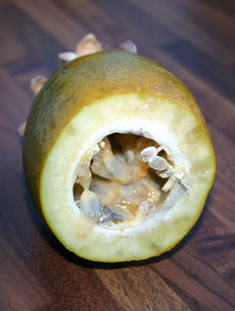 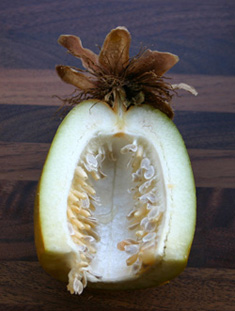 Passiflora x decaisneana cultivated and planted freely in a greenhouse. The fruit gets yellow during ripening.

Fruits of Passiflora x decaisneana cut transversal and longitudinal. The vascular bundle in one of the carpels is visible at the bottom of the fruit at right. 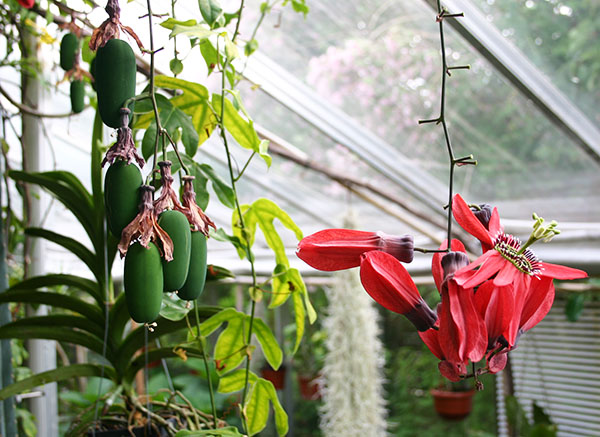 Passiflora racemosa with both fruits and an inflorescence. The wilted perianth leaves do not fall off.

The passion fruit is unilocular but otherwise very variable. In most species the fruit is a berry, but a few species have dehiscent capsules. There are numerous seeds on the three placentas. The seeds are surrounded by two integuments which are part of the seed coat (testa) but furthermore surrounded by a meaty and juicy arillus, which is important for the value of some species as food for both humans, birds, and mammals, which act as seed dispersers.  Black and violet berries are especially attractive to birds. The yellow fruits are mainly eaten by mammals such as monkeys, bats, tapirs, skunks, and opossums. A few species have so hard a seed coat that only larger mammals are able to crush it. Arillus is an outgrowth from the seed stalk. It may surround only part of the seed or be several times longer than the seed and fill the fruit locule with juicy tissue. At maturity the arillus has a tendency to collapse to a slimy mass. The most delicious fruits are Passiflora edulis f. edulis, P. caerulea, P. foetida, P. incarnata, P. tarminiana og P. quadrangularis, but there are others. The last mentioned species has the largest fruits weighing 1.5-4 kg. They taste well and the plant is cultured in several tropical countries. The seed coat has such a characteristic sculpturing that species can often be identified solely by looking at the seed. In some species the embryo is not fully developed when the seeds are dispersed. After-ripening may take several weeks while the seeds in nature are located in warm and moist soil.