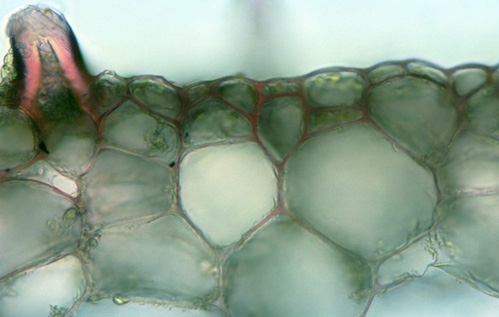 Hand-cut transversal section of the bottom zone of the pitcher showing the inside of the wall where nutrient uptake takes place. Small green chloroplasts light up in the epidermis. The coloring with phloroglucinol-HCl shows that the 2-3 cell layers closest to the inner pitcher wall are without intercellular space and lignified (red reaction). 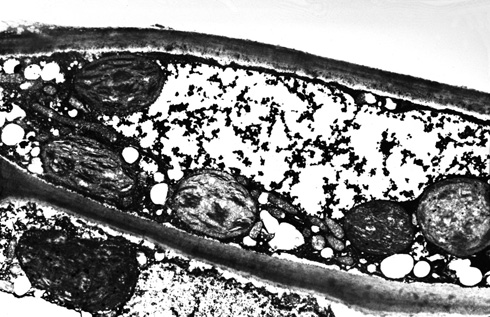 Epidermis cell with five chloroplasts corresponding to the section on the left photo, but seen in the transmission electron microscope. The fixation is not optimal but good enough to prove that the chloroplasts have grana structure. 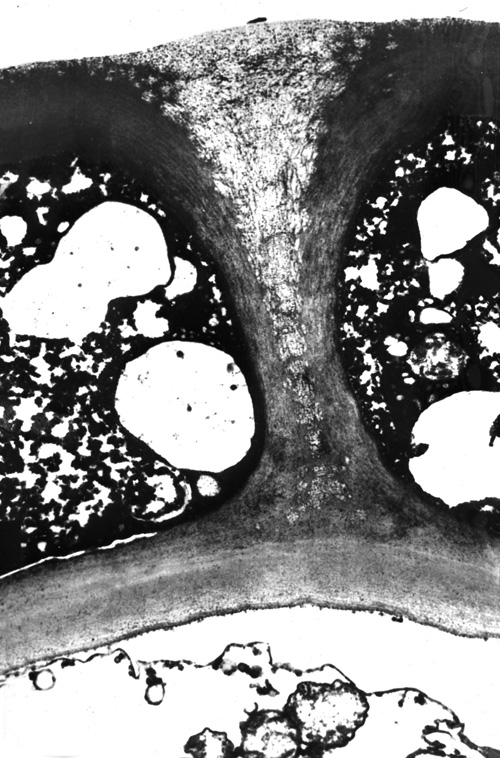 Section seen in the electron microscope of two epidermal cells (uppermost) from same area as the photos above. The lighter areas (less electron dense) of the common wall (anticlinal wall) shows cutinization of the cell wall. Cutin is a lipid which fills out the spaces between the cellulose fibrils of the cell wall and it provides the cell wall with strength and makes it impermeable to water soluble substances. Notice that cutinization is as good as missing in the outer walls.

Possibly Darlingtonia does not produce digestive enzymes and if so, the degradation of prey is completely dependent on enzymes from bacteria and other organisms in the pitcher fluid. It seems the digestive process is similar to that in Sarracenia purpurea where the pitchers form the framework for an almost independently ecosystem. The bottom zone of Darlingtonia shows significant common features with S. purpurea such as the presence of chloroplasts in the epidermis. Through photosynthesis the chloroplasts deliver oxygen to the organisms living as symbionts in the pitcher fluid. Besides bacteria and protozoa it is furthermore about larvae of the mosquito Wyeomyia smithii (Culisidae) and the mites Sarraceniopus darlingtoniae and Metriocnemus knabi (Chironomidae). The respiration of these animals provides carbon dioxide to the photosynthesis in the epidermis. Darlingtonia does not have the same type of hypodermis (the cell layer below the epidermis) as in Sarracenia blocking for carbon dioxide supply to the chloroplasts via the intercellular space in the mesophyll and stomata on the outside of the pitcher wall. In return, there is strong lignification of the cell walls in and around the hypodermis (photo upper left). Together with the lack of intercellular space in this area, it gives reason to suppose that the hypodermis isolates the epidermis  from the rest of the mesopyll with a similar effect as in S. purpurea. Since the outer wall of the epidermal cells are not cutinized, there is an open route for nutrient uptake across these cell walls. Thereby the bottom zone can be interpreted as one large nutrient absorbing digestive gland as in S. purpurea. The lack of actual digestive glands that both produce enzymes and absorb nutrients make the two species relatively primitive carnivorous plants.

Retur to Darlingtonia or to Carniverous Plants.