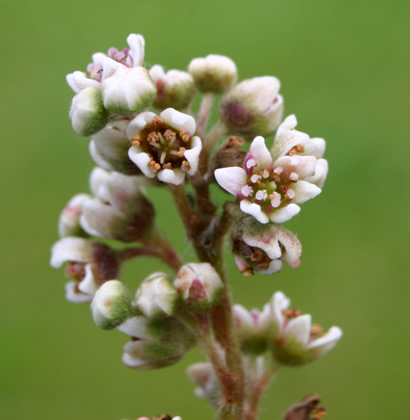 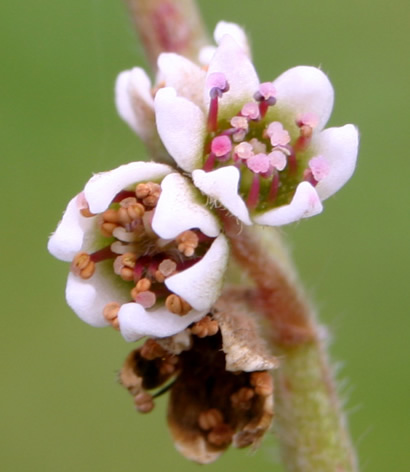 It takes Cephalotus about eight weeks to develop the inflorescence and in nature flowering begins in January. Hence, flowering occurs simultaneously with the presence of most functional traps but competition for insects for pollination and prey between flowers and traps are minimal. This is due to the marked spatial separation between flowers and traps where the flower shaft can reach a height of 90 cm. During growth of the shaft, it is equipped with up to ten small bracteole, but they fall off before flowering.

The bi-sexual flowers are not more than three mm in diameter. There are six similar whitish perianths, and two rings of stamens with six stamen in each ring, and six free carpels, which develop into capsules with one or sometimes two seeds. The capsules do not open but fall off and are spread together with the seeds by wind or water. The flowers secrete nectar and therefore they are believed primarily to be insect pollinated but self-pollination is possible. The anthers ripen successively and they are interesting due to a gland on the connective between the pollen sacs. The species epithet follicularis refers to this gland, which on the lower right picture is seen as a pink bubble on top of the stamens on the newly opened flower to the right. The function of the gland is unknown, but on older flowers the glands are shrunk, so one may assume that they for a period secrete e.g. fragrance to lure pollinators to the flowers. On the lowermost wilted flower, the glands seem to have disappeared.

Return to Carniverous plants or to Cephalotus main page