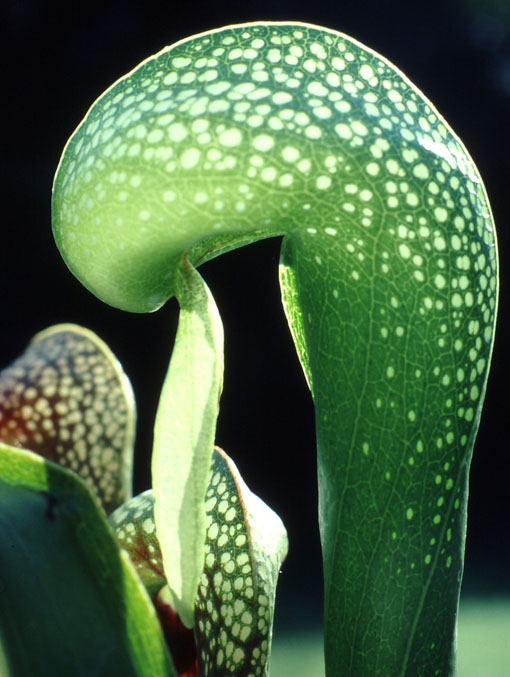 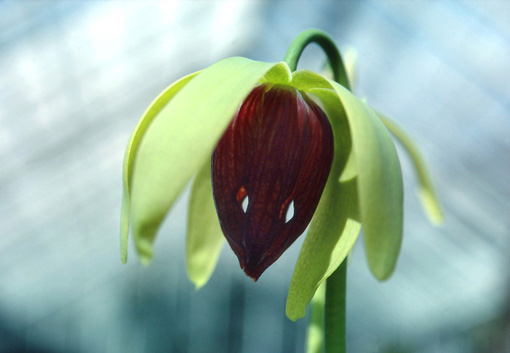 DARLINGTONIA is a monotypic genus, i.e. with only one species D. californica.  It belongs to the family Sarraceniaceae, where all species are carnivorous plants. The genus was named after the doctor, the politician, and the botanist Dr. William Darlington, and the species’ epithet refers to the fact that it only grows in northern California and western Oregon.

The popular name is cobra lily since the pitchers resemble a cobra in attack position. Darlingtonia prefers a serpentine rich soil characterized by a low content of magnesium and it thrives best where the soil is permeated by cool water, and where it simultaneously stands in full sun. However, it is also found in other localities and it can tolerate standing directly in water. Most populations occur near the coast but there are isolated inland populations up to 2,400 m.a.s, and they tolerate -10 ℃ in short periods.

The life cycle of the species and construction of the pitcher shaped leaves functioning as pitfall traps correspond to Sarracenia. The growth form is compact with a lignified, perennial rhizome, and the up to 80 cm long pitfall traps forms a close rosette. Vegetative propagation occurs by subterranean runners which may be up to one meter long. The pitcher’s upper end is so strongly recurved that it becomes dome-shaped with the opening (1-2 cm in diameter) turned downwards, and the lid is shaped like a hanging bifurcate fish tale. The pitcher edge forms a rolled back collar into the mouth. The fish tale is equipped with nectaries and it functions as a landing site for flying insects. The nectar has a scent and is part of the alluring mechanism. Usually insects search the fish tale from below and up and they often end on the likewise nectary provided collar. After finishing food search the insects have a tendency to fly up through the pitcher mouth.

The pitcher mouth functions as an open window, because more light is falling through chlorophyll free areas on the pitcher wall. From outside these areas look like whitelike spots. This is called fenestration. The animals hit the ceiling and fall into the pitcher fluid. The inside of the pitcher is smooth in the upper part with roofed scaly hairs as in Sarracenia and further down covered with downward pointed hairs which become longer and longer and up to eight mm long towards the bottom. The main part or perhaps all digestive enzymes  are produced by bacteria and other organisms in the pitcher fluid. The uncertainty is due to it technically being very difficult to separate enzymes in the pitcher fluid in regard to place of origin. As in Sarracenia purpurea a large number of protozoa, bacteria, and insect larvae live in the acid pitcher fluid, and they all play a role in the digestion of the prey. Since the anatomy of the bottom zone shows essential common features with S. purpurea  such as the presence of chloroplasts in the epidermis, cells with lignified cell walls, and a lack of intercellular space in cell layers inside the epidermis, it is likely that Darlingtonia pitchers represent the same kind of ‘ecosystem’ described for Sarracenia purpurea.

The five-merous flowers have yellow-green sepals and brown petals with crescent-shaped cutouts approximately in the middle of the two edges. Thereby, five entrance holes appear for visiting insects. The ovary is bell-shaped with the stigma turning downwards. This prevents self-pollination when the pollen grains fall out of the 15-25 anthers. The flowers are protandrous since the anthers open about two days before the stigma is receptive. During maturation the capsule is directed from the hanging position upwards and five slits appear. The seeds are dispersed by wind and furthermore they can float on water.

Klick on the photos below to get more information.

Catching method. Pitchers photographed from below to see the mouth

Digestive zone – Tvs. of the bottom zone of a pitcher