Drosera rotundifolia is the most common species in Denmark 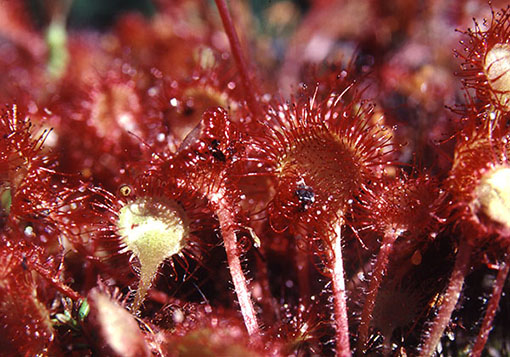 Drosera – Sundew (Droseraceae) has more than 200 species of most often slender, carnivorous herbs. The genus name refers to the shiny mucus (slime) drops of the leaves and it originates from Greek ‘drosos’ which means dew. Both rosette plants, climbing plants, and bulb plants are present. The flowers open with one per day. The leaves are covered by tentacles, which resemble glandular hairs (trichomes), but contrary to trichomes they contain conductive tissue in the stalk and head of the tentacle. The tentacle head secretes both slime and digestive fluid containing among other things protein degrading enzymes. Insects and other small animals become attracted by the shining glands and settles on the leaves. Here they are held by the mucus and degraded by the digestive fluid which is secreted after a chemical stimulation by uric acid from the prey.

There are at least two types of tentacles, long-stalked and short-stalked. The long-stalked tentacles primarily produce slime and they are located on or near the edge of the leaf. By asymmetrical growth in the cells of the stalk they bend perpendicularly over the leaf lamina if they are touched by the prey (mechanical stimulation) in its struggle to get free. After a chemical stimulation they can bend towards the prey from all directions. Furthermore, chemical stimulation will get the lamina to bend or role inwards by help of the growth hormone auxin causing still more tentacles to get into contact with the prey. The short-stalked tentacles are placed in the center of the leaf lamina and they primarily secrete enzymes and they are nutrient absorbing. The enzymes break down the soft parts of the prey to amino acids, and this nutrient supplement makes sundew more competitive on nutrient pure substrate and it secures production of more seeds able to germinate.

The main distribution area of the genus is in Australia and South Africa.  There are three species in Denmark, Drosera rotundifolia, D. anglica, and D. intermedia. The two last mentioned species are rather rare. The small white flowers are only open in full sun at mid-day. On a raised bog D. rotundifolia grows relatively dry. i.e. on the tussocks, while D. intermedia grows in the wettest areas, i.e. the hollows, and D. anglica grows in the transition zone between tussocks and hollows. This distribution of the species between habitats leads to less competition for the prey. Hence D. intermedia catches mostly flying insects such as mosquitoes that settle on the nearest leaves when hatched from the pupa. The two other species catch especially crawling animals such as ants, beetles and spiders, which do not like to get wet feet.

Click on the pictures below to get more information. 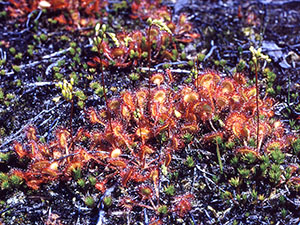 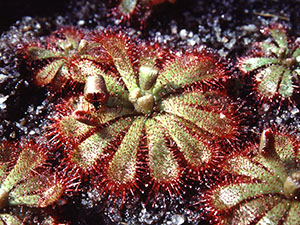 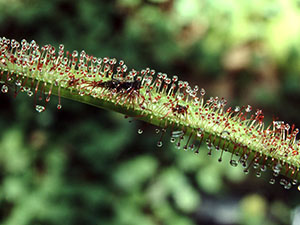 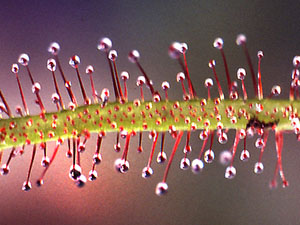