Utricularia australis, the entrance (door) to the bladder. The two antennae are cut off.

The bladder function and the course of the catch are here described for Utricularis australis found in ponds and lakes in Denmark. Bladder construction and the course of catch are similar to other free-floating species in Europe. Other bladder types are illustrated here, while the development of the bladder is described here. As mentioned elsewhere it goes for all species that the bladder can only function when surrounded by water.

The left Fig. shows a single leaf. The linear segments are used for photosynthesis while the bladder segments serve to catch small animals living in water. Fourteen different types of hairs (trichomes) or more correctly, thirteen trichomes and one emergence participate in getting the bladder to function. These trichomes and their Danish names (do not despair) and position on the bladder are shown on two schematic drawings below.

The catch may in short be described as follows. Water is pumped out of the bladder by trichomes called hydathodes. Thus a vacuum is established inside the bladder. Prey is allured to the mouth/door by several types of glands producing alluring substances. If the prey touches one of four trigger hairs on the door, it will swing into the bladder due to the vacuum, and some water with the prey is sucked into the bladder. Then the door swings back immediately. It takes about 1/32 second. The course of the catch is in other words similar to how a mouse-trap with a trap door functions. Enzymes are secreted in the bladder by four-armed secretory trichomes and nutrients from the decomposed prey are absorbed by the same four-armed trichomes. Simultaneously, the vacuum is reestablished so the bladder can be reused. On the Fig. just below and on the left half of the colour photo above the bladders are ready to catch since the sides of the bladders are concave due to the vacuum, while in the right side of the colour photo the bladder sides are convex, and the bladders are filled indicating the door has been activated. In this case, the activation toke place when the shoot was lifted up through the water level and some air was sucked in making the bladder shining whitish.

The sides of the bladder are highly flexible since they consist of only two cell layers, while there are more layers around the door and the threshold (see diagram) The vascular bundle in the bladder stalk divides in two branches which follow the median line of the bladder (the symmetry plane). Therefore, the change in bladder form during establishment and equalization of the vacuum occurs solely in the sides of the bladder. The outside of the bladder is covered with glandular trichomes functioning as hydatodes pumping water out of the bladder. The hydatodes are most numerous in a crib in front of the threshold and they are thought to be responsible for most of the water pumping, which can amount to 40% of the bladders maximal volume. The area in front of the door is called the vestibule. It is surrounded by trap-hairs and two forked antenna (emergences) for the purpose of guiding prey towards the door. On the Fig. to the left, the antenna are cut away but they are just visible on the colour photo. The difference between hairs (trichomes) and emergences is that trichomes originate from a single epidermal cell while both epidermal cells and cells from deeper layers participate in the formation of an emergence.

Several different glandular trichomes (long-stalked, T-shaped, and pear-shaped) are located on the vestibule and the door and they are all thought to have a function in alluring prey to the door be secreting a sugary product. Four stiff trigger hairs are located on the door. These trichomes function as a lever. If touched, the door’s more solid part, below the insertion of the triggerhairs, tilts out of the water tight packing between door and threshold. Then the pressure difference between the outer environment and the bladder lumen ensures the door moves inwards and upwards towards the bladder ceiling, while the spring tension in the cell walls of the door ensures the door swings back again in 1/32 second. There are no electrical impulses involved in this action such as described for Drosera (Sundew) and Dionaea. The construction of the door and the packing against the threshold with slime and a cuticle bag (velum) is further described here. 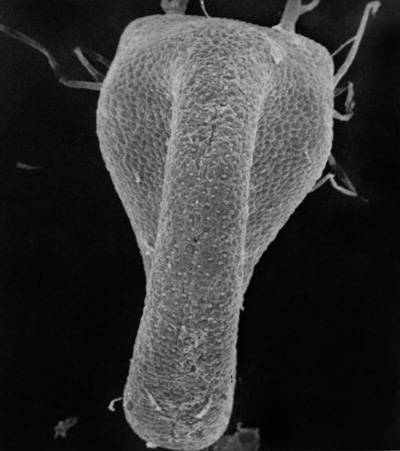 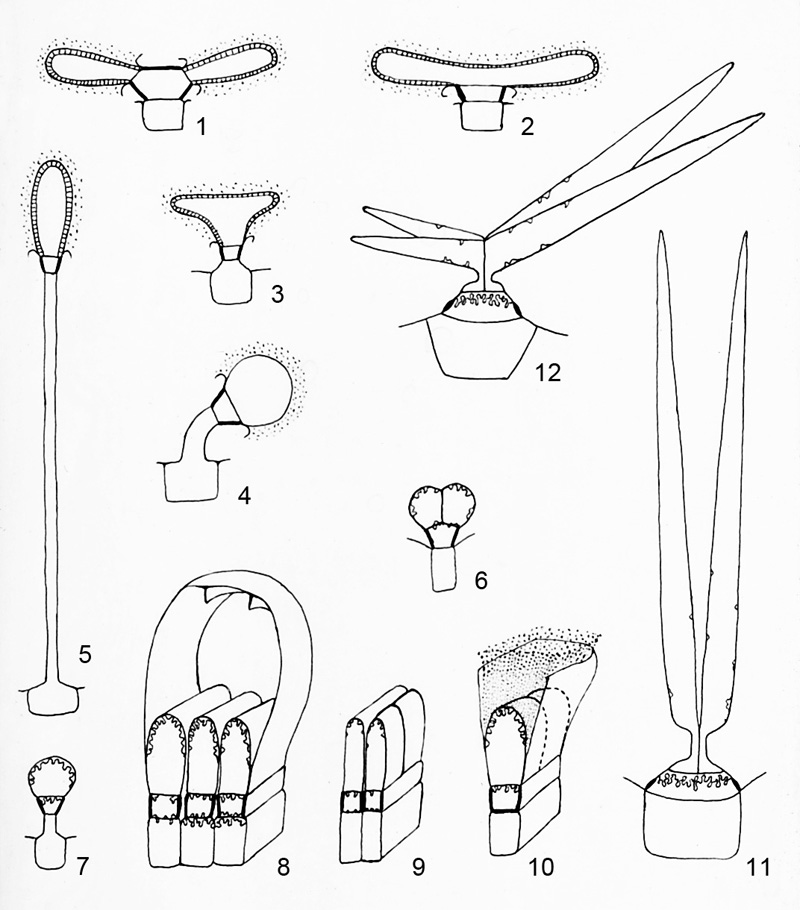 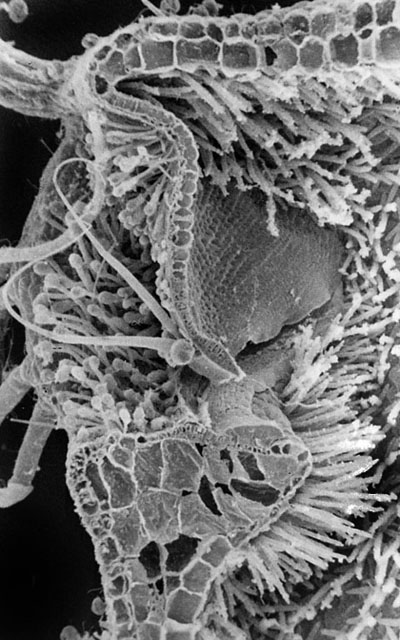 The left Fig. shows 12 of the 13 trichomes occurring on the bladder. Only the triggerhairs are not included, but seen on the diagram and the SEM photo above. Number 1-4 are placed on the door. 1-3 are variations of T-hairs. 4 is called pear-shaped hair. 5 is a long-stalked alluring hair placed on the upper part of the door, on the threshold, and the sides of the vestibule (photo above the diagram). 6 represents the hydathodes which occur all over the outside of the bladder. 7-11 are placed on the threshold. 7 is hydathodes located in the crib in front of the threshold. They are called vestibule hydathodes. 8-10 are glandular hairs forming the threshold epithelium responsible for the watertight packing around the bottom edge of the door and its sides. 8 forms the cuticle bag (velum) and 10 produces slime, while 9 is an intermediate form which to some extent can replace 8 and 10 if necessary. 11-12 are placed inside the bladder. They are called two- and four-forked hairs (trichomes) and function as digestion glands and are assumed to be responsible for both enzyme secretion and absorption of nutrients.

The glandular trichomes are constructed over a common scheme with a basal cell, an endodermoid stalk cell and a head of 1-4 glandular cells. On the left Fig. slime, production is indicated by small dots. Hatching of cell walls in the glandular head marks that callose is present, a product that are able to close the cavities between cellulose fibers in the cell wall. This could be of importance after the cuticle is blasted during slime secretion. The cutinization in the endodermoid cells is shown by a bold line and labyrinth cell walls are indicated by a wavy line. The labyrinth walls increases the surface area of the cell membrane considerably, and labyrinth walls develop to facilitate an intensive ion transport across the cell wall. The digestive glands are described here, and the construction of the threshold and the door is described here.