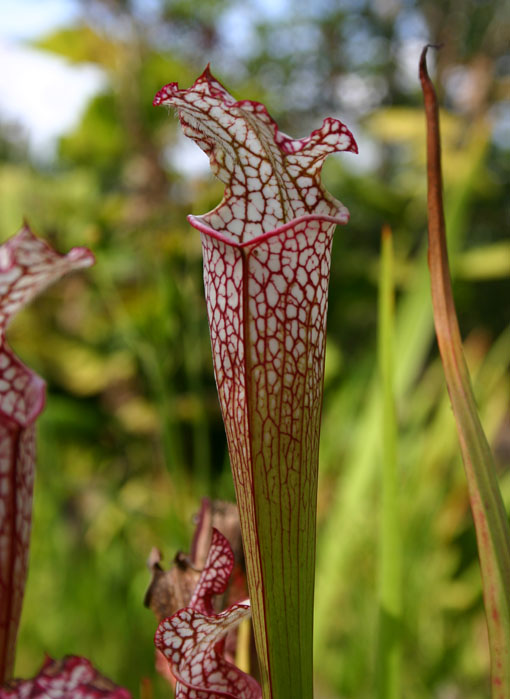 Sarracenia purpurea grows in swamps in southern Alabama and adjacent states in USA. The white spots and red lines on the lid and the upper part of the pitcher attracts flies among others. 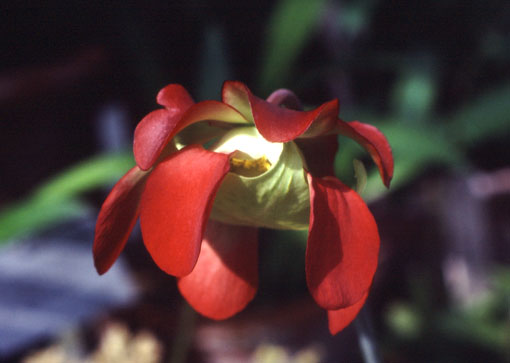 SARRACENIA – a genus of carnivorous plants in the family Sarraceniaceae named after the Canadian doctor Michel Sarrazin. Hence, the name is not related to the helmets of the Saracens, although the shape of the leaves in some species remind of a helmet. All eight species are native to the southeastern USA, while the distribution of S. purpurea extends far north into Canada, and furthermore it is naturalized in several European localities. In addition to subspecies and varieties, there are several natural hybrids and even more artificial hybrids are available in the trade.

All species are perennial herbs with rhizomes. At first short flat juvenile leaves develop and then a rosette follows of up to one-meter long funnel- or pitcher-shaped leaves, which function as pitfall traps. The pitcher’s upper part may be upright, bent over, or equipped with an immoveable lid. By the help of strong colours, fenestrations (chlorophyll free light transparent areas), and nectaries, the upper part of the pitcher functions in alluring insects and other small animals to the pitcher opening. The pitchers are assumed to develop through a combined process of invagination and rolling up, where the edges of an originally heart shaped leaf partly unite simultaneously with the lower (abaxial) side of the leaf extends more than the adaxial side. In this manner, the originally adaxial side of the leaf covers the inside of the pitcher while the abaxial side with stomata constitutes the outside of the pitcher. Along the united leaf edges, a more or less projecting wing appears having nectaries on the edge. This so-called ant track allures crawling insects and invertebrates to climb up the pitcher.

The pitcher edge is organized in such a manner that prey easily lose their foothold and fall into the pitcher where they drown in a liquid that is partly secreted by the pitcher and partly consists of rain water. The inside of the pitcher wall is constructed to prevent the prey from crawling up the wall and break free (see SEM photos below). The liquid contains digestive enzymes partly produced by glands in the pitcher wall and partly originating from bacteria and other organisms living in the liquid. The complete bottom zone of the pitcher functions as one large digestive gland, which in Sarracenia purpurea has an additional special function as supplier of oxygen to symbionts living in the pitcher fluid (see more here). As the only one, this species does not seem to produce any digestive enzymes.

In the early spring, long stalked inflorescences are produced with nodding, radial symmetrical, 5-merous flowers, where the style resembles an open upside-down umbrella. The umbrella collects the pollen which visiting bumblebees then collect with their hairy chest. In most species, the pitchers are produced throughout the growing season, and the temporal and spatial differences in development and position of flowers and pitchers prevent competition between traps and flowers for the same animals as prey and pollinators. Furthermore, about half of the species also produce flat leaves only for photosynthesis early and late in the growing season.

A number of insects use the pitchers as a habitat and a hunting area. Spiders, mantises, and even frogs are sitting in wait at the pitcher mouth for animals lured to the pitcher in search of nectar. Three species of moths and especially Exyra semicrocea use the pitchers as a pantry for their larvae and as a protected place for the pupae. They place one egg per pitcher. The larva immediately begins eating the inner wall in a circular manner some distance from the pitcher mouth so the upper part of the pitcher collapses as a lit, which then protects against rain and predators. Before pupation, the larva gnaws two holes, one exit hole for the mature moth just above the remains of the prey and a drain hole further down. Now the larva has a housing and a pantry for the winter. The mature moth also uses the pitchers as a hiding place and it is able to walk on the inner walls without problems. However, birds have learned the holes in the pitchers means moth larvae, which they rub.  The wasp Isodontia auripes builds nests of grass in the pitchers where it saves anesthetized cicada for their larvae. In Sarracenia purpurea a complicated (symbiosis) has been observed between the carnivorous plant and a number of organisms so the pitchers represent an almost independent ecosystem.